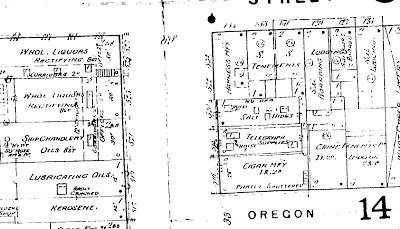 Not the state of Kentucky, but the bottle or more specifically the information surrounding the Kentucky Gem.

Call me obsessive, but I like to attach a place to a bottle or shot glass. For me, the detective work is as much fun as the quest to acquire a new piece. I've had a couple of requests to publish a photo of this example and I thought that it would be fun to insert a clip of the Sanborn Fire map showing the actual location of the business.

I've had access to the Sanborns (all 660,000 maps for all 50 states) for a couple of years. I'm always fascinated by locating the actual location where my treasures originated and am also captivated by the fact that a lot of these liquor wholesalers "sold the sizzle rather than the steak". Many of the "big names" were actually operating out of the basement of a neighborhood saloon.

And so the search for the home turf of T.G. Cockrill & Co. began. The first hurdle presented itself when I opened the S.F. map page. Darned; the earliest map listed is 1886 (with subsequent revisions through 1893). According to Thomas, Cockrill started up in 1872 but left "the business" in 1873, when he was elected Chief of Police. He remained a silent partner until 1879 or 1880, when the endeavor folded . Well that's a fine how do you do... Always looking for that pony hiding in the closet, I figured that this shouldn't pose a major problem since S.F. had remained relatively disaster free during this era and the occupancies and addressing should have remained pretty much intact. Off I went in search of 518 Front St.. There it was, big as you please; a Telegraph Supply House. And visions of EC&M's and Cal. Electric insulators danced through my head... Focus, you dummy I told myself. Back to reality, I noticed a Cigar Manufactory on one side and a dealer in Salt hides on the other. Across the street, the number 521 stared at me. But wait, Thomas stated 518 - 521 Front Street. It was at that point that I began to wonder - how can you be in two places at once, when you're not anywhere at all.

And so, the plot thickens. Logic says that a startup company would not be sufficiently capitalized to maintain three buildings, with two on the north side of Front St. and one more on the south side. Finances aside, it makes no sense to occupy the middle portion of a block on both sides of the street. And so I leave it to you, my fellow collectors, to help solve the mystery.
Posted by Kentucky Gem at 11:05 AM