Digging around for those whiskey shards made me think you might want to see where we look for the old glob tops here in Utah. The early silver camps were a good ticket 20 years ago and more. Alta produced a bunch of 5ths, mainly J.F. Cutters and Hotaling Non Crowns. Plenty of Millers flasks, large and small came out of here. A few "strays" made their way up to the 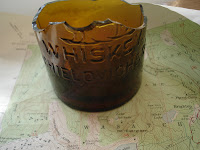 boarding houses. Clarks -Samual More, Durham, and even a broken green Clubhouse was found near the Davenport Mine. World class ski resorts surround the area now.

Here is another broken Durham - No Foot. This one was found near the Black Bess Mine high in the Wasatch Mtns. Most of the stuff around this boarding house was later 70's or early 80's-ish. Broken Jesse Moore flask also found here. 3 or 4 whole bottles (junkers) was all we took out of here in two separate trips. One heck 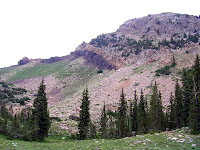 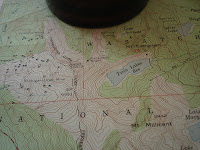 Topo shows the elevations - 10k feet is not exaggerating. Can't drive anywhere near it, all wilderness area.