AN "ANGEL" OF A FLASK 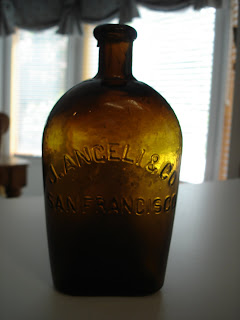 One of the most highly sought after western glob flasks is the J. Angeli & Co. San Francisco(tf-2). With just 6 known examples, this is an extremely rare bottle. Not much is known about the bottle, other than what is published in Thomas' Whiskey Bottles. It is certainly an early flask, by all appearances, and all of the known examples have been found in California I believe. The Angeli is a different shape than other western flasks, being deeper through the shoulder area than the other early western flasks. I don't have a handle on when the Angeli was actually distributed. J. Angeli & Co. was listed in the San Francisco directories at 524 Washington St. in 1869-1870, then at 211 California St. in 1871-72. You might expect the bottle to be more commonly found if sold for 4 years.
It is larger than a pint, and I have seen 5 of the known examples; 2 in darker olive amber, 2 in more of a yellow olive amber, and 1 in lighter green amber. 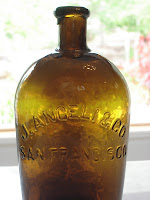 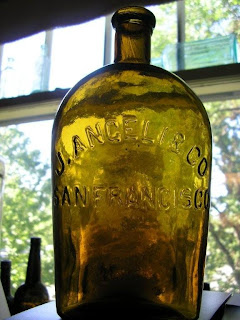 Does anyone have anything additional on the Angeli flask?? Newspaper ads, bill heads, any other info at all?? Please send it along and I will ad it to this post.

Here are a couple of comparison picts. with an Old Valley flask... 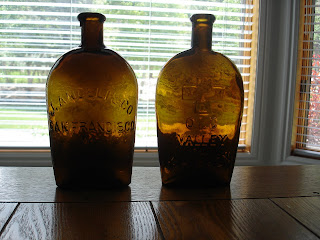 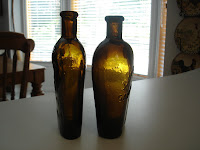