Here is a glop top fifth that does not seem to get a lot of attention. Thomas indicated that these were distributed between 1875-80 which seems a tad early to me. I believe it was made about the same time as the Portland Hotaling amber coffin style flasks and date to the mid 1880s. I have seen these in light yellow amber to dark chocolate and every shade in between, with the dark chocolate example exhibiting millions of champagne bubbles and heavy whittle effect. The remainder seem pretty neatly made even though they are not air vented. To my knowledge, this fifth has been found from Alaska, to Southern Oregon with the latest find coming from Portland. These are open face whiskies with the ever important "Sole Agents" and of course the Hotaling name. I am not certain if these predate the Portland "Rick Rack" fifth or are from the same time period. The T-55 only comes with an applied top and are pretty scarce. Thomas indicates only 2-4 known examples, but I know of 9 of these in collections. Oregon just does not have very many glop whiskeys, and none are common. Have any of these been dug in California?

Here is one of the strongest embossed examples of the Bear Grass that I have ever seen. These are pretty tough to find as it is, with  maybe 12-15 in collections. For some reason these bottles are usually fairly light in the embossing pattern. They 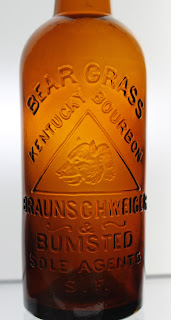 come in this lighter orange amber in most instances, but one was dug broken several years ago in Idaho with strong olive tone. I have also heard that a mint example in an olive color was in a well known collection in Washington many years ago, but it is not known where this bottle now resides.
Of the 7 Bear Grass fifths I have handled, all but two had relatively weak embossing. These are very underrated in my opinion as they have it all...except whittle effect. The base exhibits a large "X" identical to the Fleckenstein & Mayer fifth. I believe the amber Bear Grass was produced about 1884. I have not heard of any examples being dug since the Idaho pit with 5 found.
Posted by Westernglassaddict at 4:26 PM 1 comment:

Back to the jungle with my buddy Jessie.

This place is a tough nut to crack but every once in a while we do get lucky. This pit produced more liquor bottles only this time it was of a mixed age. 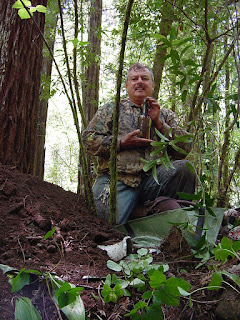 These guys drank the good stuff, the pieces have been something else. 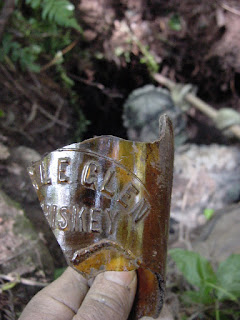 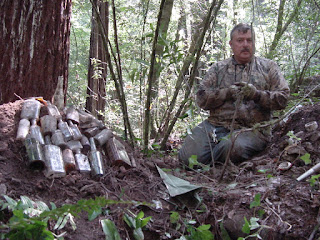 Posted by Golden Plantation at 6:46 PM No comments: