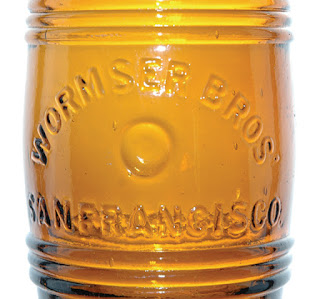 The firm of Wormser Brother was located on the corner of California and Front Streets in San Francisco and listed as importers and jobbers of wines and liquors. Started sometime in 1856 Isaac Wormser, who was living in Germany, was the president of the company and his brother Lewis was the manager. In 1864 Lewis left San Francisco and his brother Simon took over management of the company. In October of 1867, during Simon’s management of the firm, they trademarked the “Golden Sheaf” brand of whiskey. By 1872 the Wormser Bros. business was sold to the firm of Braeg Frank and Dallemand.


The Wormser Brothers produced some of the more desirable western bottles while they were in business in San Francisco. The earliest glass container from the Wormser firm is the large whiskey flask horizontally embossed WORMSER BROS. SAN FRANCISCO. The Wormser  flask is considered very rare with possibly 8 to 12 examples in private collections. Several of these early containers seem to have poor quality glass with annealing checks and other manufacture related problems. It is not known if this bottle was blown in a San Francisco glass house or manufactured in the east and distributed in the west.


﻿
﻿
It is believed the barrel shaped bottle with an applied tapered top and a smooth base embossed WORMSER BROS. SAN FRANCISCO was produced for a very short period of time, possibly in 1869 only. Although I could not find any advertisements to confirm what these bottles contained, Western collectors believe this container held a whiskey bitters product.


﻿
This barrel shaped bottle comes in various shades of amber from light yellow to darker brown amber. Most examples show very little crudity but a couple examples that I have observed have some pretty good whittle to the glass.

It is thought that there are between 25 and 30 of the Wormser Bros. barrels in collections at the present time.  Years ago, in the Virginia City area, several examples of the Wormser barrel were recovered from a large bottle digging excavation.

﻿﻿﻿﻿﻿﻿﻿﻿﻿The last bottle produced by the Wormser Bros. is the vertically embossed flask. These bottles were more than likely manufactured post 1869. They come in colors ranging from dark chocolate to green and are the most common of the Wormser bottles. 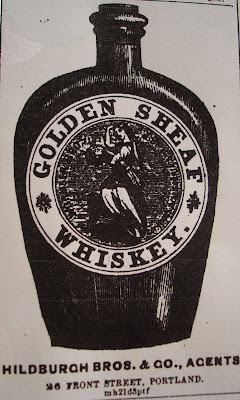 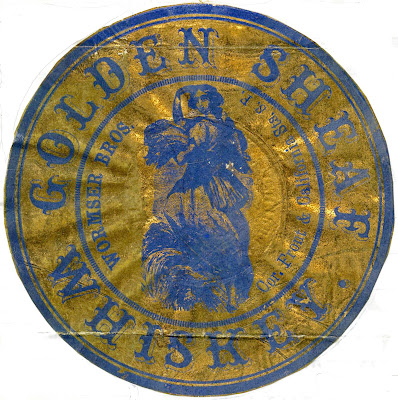 Abraham B. Sands of New York City opened his first retail drug store sometime around 1840. In 1842 he expanded his horizons and opened a wholesale store at another location installing David Sands in the original retail store. By 1843 Sands has published a informative pamphlet on the curative properties of their sarsaparilla product.  In early 1850 the firm of A B & D Sands emerged as a wholesale and retail drug company and were advertising regularly in local newspapers.

By 1851 David retired, was replaced by William Sands, and the firm was listed as A.B. Sands & Co. After 1851 Sands & Co. became primarily a wholesale drug operation. Sands produced other products (Horehound Cough Syrup, Liquid Opeldoc and Anodyne Liniment) but his sarsaparilla was by far his best seller. A.B. Sands & Co. continued in business until 1875 when the company was dissolved.

Pictured at right is the earliest example of the Sands Sarsaparilla. It has widely beveled corners and is embossed on three panels SANDS SARSAPARILLA NEW YORK. The Sand’s Sarsaparilla was distributed throughout the California  gold rush country. Open pontil examples of the Sand’s have been found from  San Francisco to the Mother Lode and the  gold rush camps and settlements of the Northern Mines. These bottles are considered  scarce but as with all gold rush era bottles are highly collectable and prized by western and gold rush bottle collectors. The Sand’s that I have examined, that were recovered from Sierra County, are usually pretty crude, highly whittled and usually come out of the ground without mineral staining 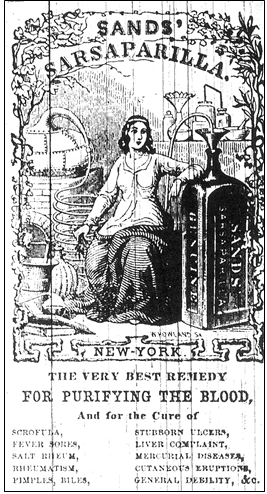 Pictured at left is a copy of a Sand's Sarsaparilla advertisement. The second variant of the Sand's bottle, on the right side of the ad, is being filled with the sarsaparilla product. Sand's sarsaparilla was coined by the company as "The Very Best Remedy for Purifying the Blood"

Pictured at right is the later variant of the Sands bottle that was produced sometime after 1858. It still has a pontil base, but is a larger size, different shape, and has “GENUINE” embossed on one panel.

One whole example of the second variant of the Sands was recovered from the gold rush settlement of Excelsior in the early 1990’s. Two examples were recovered from the southern Sierra County settlement of Plum Valley and another mint example was un-earthed at Brandy City by a Nevada City digger. Numerous broken examples have been found at the Sierra County gold rush camps of  Monte Cristo, Poker Flat, Chaparral Hill and Rattlesnake. This variant of the Sands is considered more common than the earlier example with the widely beveled corners but is still a scarce and collectable gold rush bottle. 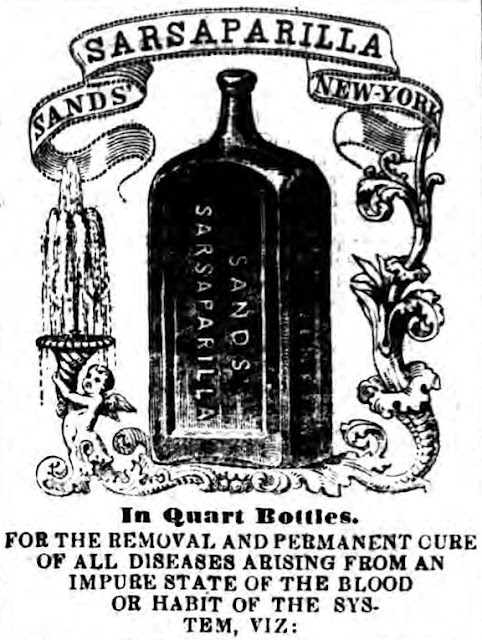 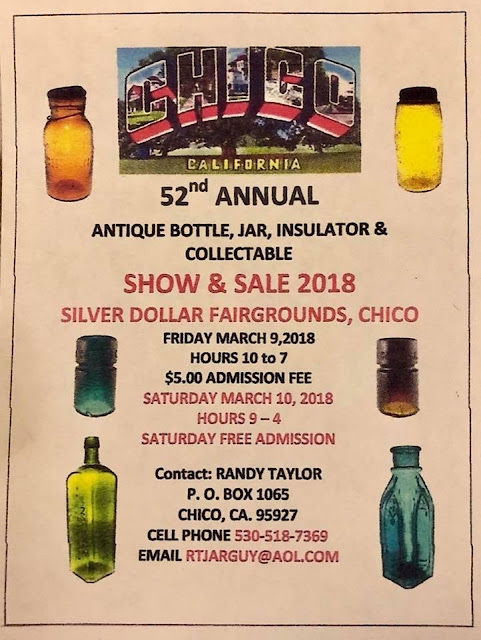