I have developed an unnatural fondness for the earlier slugplate bottles, or whatever they should really be called. (Most of them are not true plate molds). My leanings are to the pre-1875 fifths and flasks, mostly because that is pretty much all we find in Utah. I don't know what happened, freight rates on the C.P.R.R. is my guess, but around 1876 or so almost all goods shipped into Salt Lake City switched from coming from the west (San Francisco) to coming from points east, Chicago - Omaha. This was bad, very bad, as there are absolutely no '80s or '90s western whiskies found in Utah. NONE! ZIP! NADA!! No embossed seeds, bitters, fifths, nothing! So... no slugplate embossed whiskey bottles were distributed out of SLC. 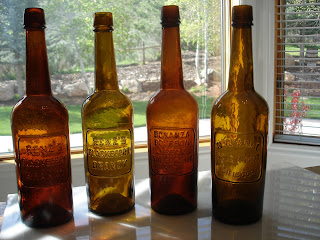 Why then would I have this interest in slugplates? Gotta blame a certain Mr. Eastley on this one. When I purchased a chunk of his fifth collection a few years ago he really had some killer slugs. I mean the air vented amber ones didn't do much for me, but the non vented ones - they were nice!

Had to sell a good portion of that collection, just to finance the bottles that I kept. Spiral neck - gone! red Whiskey Merch. - gone! Durham- history... can't even remember what they looked like. Sold about 30 of those bottles, and I am haunted by only one... R.T.Carroll(t-10). A damn slugplate. It was light yellow, whittled and dead mint! I knew it was rare, but... what a freakin idiot! I believe Fred Kille picked it up from me, we know that collection is a black hole. Sorry Fred, you know I'm kidding. At least you don't have to deal with seller's remorse. Maybe I can still stop in and see the bottle when I am in town??
Posted by soleagent at 8:28 PM