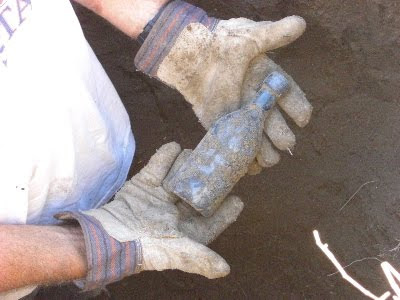 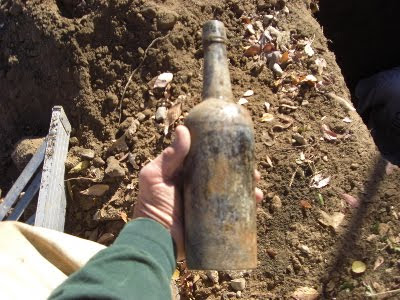 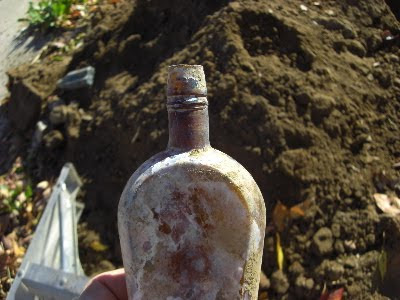 Yesterday's privy dig did kick out a couple of globbies, but both had no embossing. Maybe the letters fled as our tools approached them. LOL That's the way diggin goes. Not every pit has "glory". This one was just a few years too old to hold embossed whiskeys and the saving grace was a couple of blue Owen Casey sodas. The amber coffin was a late throw that was found above the actual use layer.
Posted by Mike Dolcini at 8:03 AM 1 comment:

Here are some ads that surfaced again when sorting all my files and junk.   We have written about these topics in the past and you may find these interesting. 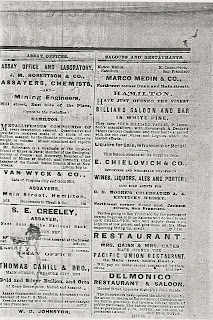 E. Chielovich was out in the "wilds" of Eastern Nevada in 1869 trying to grow the market for Jesse Moore Bourbon.   Obviously, this is a couple of years before the embossed J.Moore bottle made an appearance.   Outfitting saloons was a significant part of the early San Francisco liqour dealers distribution method.

DAVY CROCKETT - PURE OLD BOURBON   label.   This blown up  from an envelope or advertising cover. 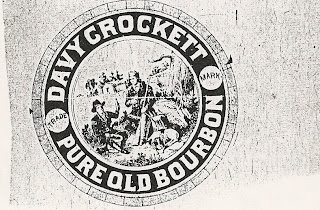 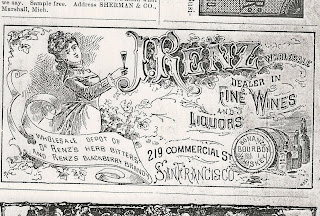 Here is a cool Renz Wholesale Dealer ad that I had printed once before.  It comes from an 1882 issue of the San Francisco paper, the WASP. 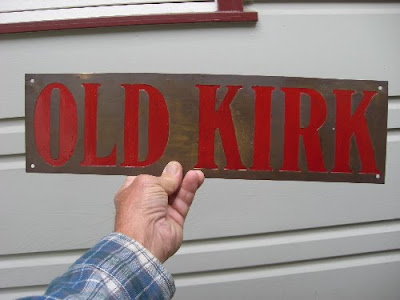 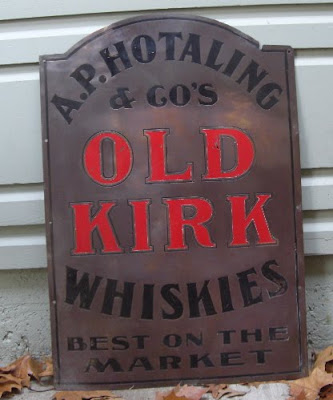 I know that this is a bit off topic, but sometimes we collect things that aren't related to applied top fifths or flasks. The subject of these two signs is the brand that the A.P.Hotaling Co chose as it's flagship brand after divesting itself of the J.H.Cutter whiskies. Although only sold in paper labeled bottles, the Old Kirk Whiskey was a popular product, earning another fortune for Hotaling's heirs.

I found these privy dug pieces while rummaging around in the garage getting my duck hunting gear gathered up. They aren't good enough to come inside, so they stay in the garage, along with old barrel ends and boxes. Eventually, I'll get around to polishing them up and hang 'em up on the outside of the garage.
Posted by Mike Dolcini at 10:26 AM 2 comments:

A real Zinger of a "Bottled By" Cutter! 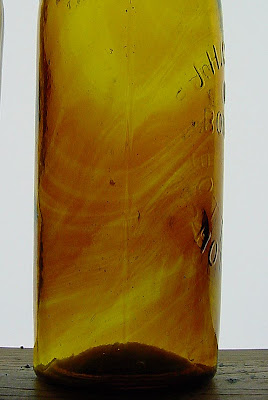 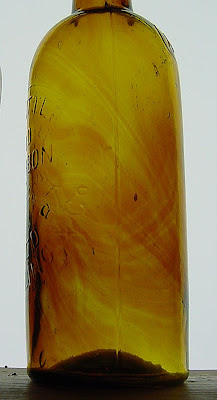 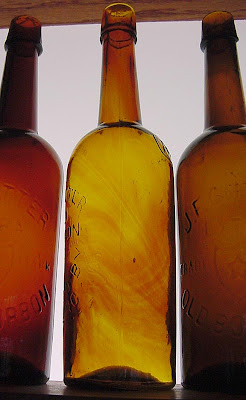 Here's something totally unique that traded hands recently, thought I'd share a few pictures before it leaves here for its new home. It's a "BOTTLED BY" Cutter blown in a light yellow amber with an applied top with heavy bands of dark puce swirls throughout. I've never seen such intense swirling like this in any embossed Western 5th. Kinda reminds me of the tornado out of the Wizard Of Oz as it's only a dream to find something like this with any embossed Western bottle.

Posted by Golden Plantation at 8:33 AM 5 comments: 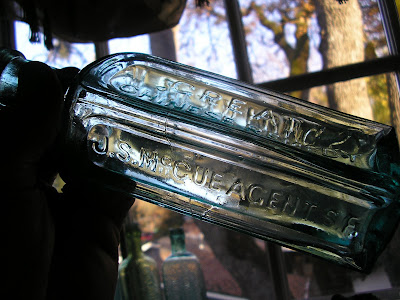 Ok, I know that is is probably some type of criminal offense to post a Western medicine on the whiskey blog... I do love those early meds though, and though this is not the forum to post an early S.F. med, this is a pretty interesting one!" Dr. AH Fung Great Chinese Remedy, J.S. Mc Cue , Agent S.F. " Huh? Mc Cue? Yes, there it is! Was Mr. McCue into the medicine game? Lots of questions but one thing is for sure, this medicine may not be quite as rare as an Old Signet, but close. He obviously embossed something with his name...here is the proof. Looks 1873 ish to me.

Posted by Westernglassaddict at 4:50 PM 11 comments:

Well,  back in 1997 it was this Thos. Taylor  Virginia, N(t-151) that took the prize!    I was cleaning out some old folders and ran across some photos of the Downieville Whiskey Extravaganza of 1997.   There was some stiff competition from a well known 'beer label town' Clubhouse,  and   'Old Cutters'  smokin' J.H.Cutter(t-49) was looking pretty strong.   By popular vote?  the Mayor's Tommy T. was the chosen winner. 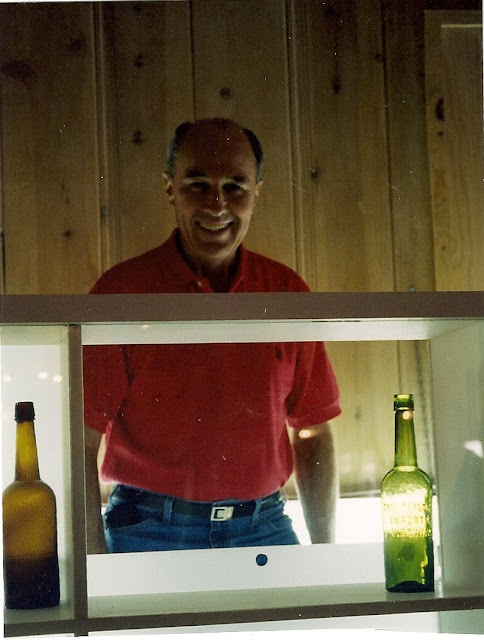 "SMILING"  Bob F.  with the meanest, greenest fifth!!   A Nevada bottle to boot!!

I'd be a smiling too,  if I owned that bottle!

Keeping up the theme of bottles we have not talked about before,  here is an early one.   Jockey Club(t-19)
These are only known in the sixth size,  and seem to run in the early 70's era.   George Chesley was a pioneer merchant and liquor dealer opening a store in Sacramento in 1855.  He had been a very early arrival to California, pre gold rush,  and had gained experience running an auction business or commission house in early San Francisco.
According to Wilson,  Chesley opened up a 'liquor house in the heart of the San Francisco liquor district' in 1872 and for a few years traveled back and forth between his warehouse in S.F. and the store in Sacto.  In 1877 he turned the San Francisco business over to an agent. 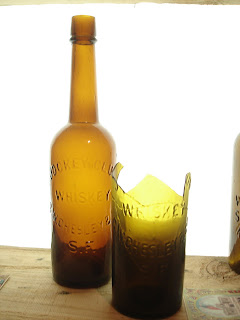 This broken one was found a few years ago in eastern Nevada.

I found two additional broken examples in the eastern side of the State.

Not too many around,  would rate as very rare.  Several beautiful, whittled,  greenish examples are known. 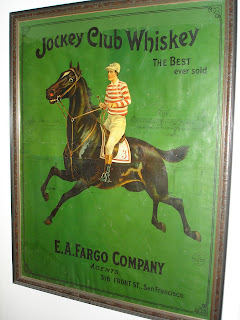 Later the brand was sold by E.A. Fargo of San Francisco.

Does anyone have any additional information to share on Geo. Chesley?  E.A. Fargo?   Please pass it along.

Another story of two of a kind rare globs is this extremely rare DENAVEAUX and MAISON(t-61).   Years ago,  late 60's-early 70's,  two of these were picked up from an I-80 antique shop/ rock shop/ junk shop somewhere between Lovelock and Wells.  I don't know where exactly,  but a long time Salt Lake collector happened upon them on his way home and knew enough about whiskey bottles to take a chance at 'a hunerd' for the pair.  He unloaded both of them quickly,  one went to the Owen Collection,  the other was sold locally and fell out of sight... until three years ago.

When I purchased the Owen Collection a few years ago,  I obtained Blackie's "little black book" of collectors that he knew and bottles that were on his radar from the 1960's-70's.  Obviously, that little book has been very interesting!!  I was able to track down the family of the owner of that second Denaveaux and Maison.   The two Maison's were back together again,  well, for a few months anyway.... 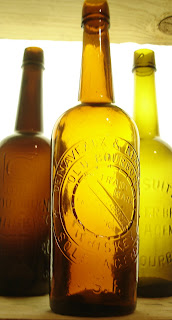 Another transitional fifth,  at least one of the known examples is a tool top.   Airvented,  so it is not real crude,  though this one has a bit of whittle.   A very pretty bottle and a rare one!   Still just a handful in western collections.
Posted by soleagent at 8:16 PM 4 comments: 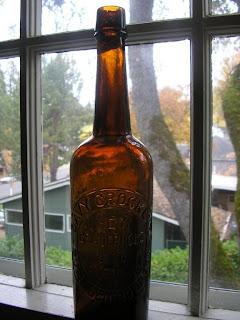 I was excited to hear that Dale had acquired this nice example of a globby top Davy Crockett(t-73).   I had just presumed that he had purchased the example that Bruce -aka "Kentucky Gem" was able to land as part of the old time collection as reported a couple of weeks ago.   NOT SO FAST... it turns out there are two globby Davy's that have found new homes.


Bruce is more than thrilled to have added his Davy Crockett to the fold,  and was/is in no hurry to send it down the line.   I guess they had both of them at the Canyonville Show to do a little comparing.


A transitional era bottle,  common with a tool top,  only a very few known with a glob top.

Interesting that two examples would be reported within a week of each other.

I'm puttin on the old coon-skin cap and headin for the woods....  well, maybe I'll wait 'till next April...  I'd sure like to find one of these. 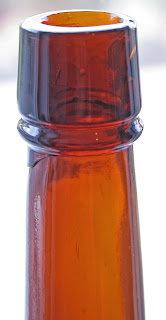 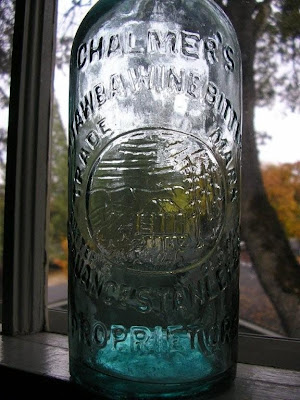 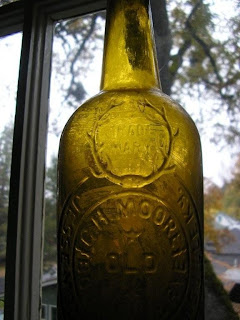 Here are a couple of photos that I just received.   Some super additions to M.E.'s ever growing collection.

Here is one that he has been wanting for quite awhile.

Very nice Jesse Moore(t-94 var.A)  or without the vent.  Great color!  Just came from the digger, needs to be cleaned up a little. 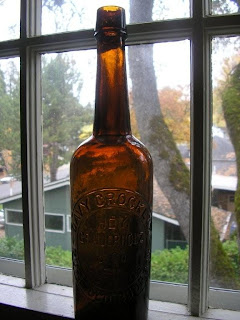 Davy Crockett(t-73)     Here is a rare one.  I have only seen a couple of these over the years with the glob top.   Great addition! 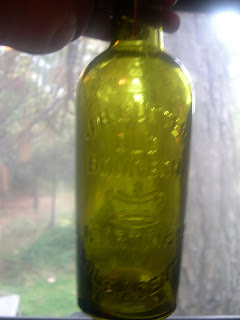 Here is a photo sent in by a reader from the "Southern Mines".
Little fuzzy on the picture,  but there is no doubting the color.

Gads!   I don't know if these get any more green than this!