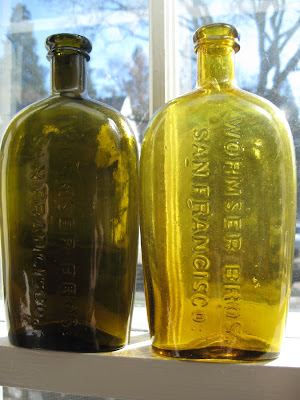 I have always been attracted to the earlier Western flasks. Some of the earliest are the Wormser Bros. flasks from San Francisco. The horizontal embossed Wormser is supposedly as early as 1865(?), and the "Fine old Cognac" about 1872. The more commonly seen vertically embossed flask is listed in Thomas' book as being manufactured from 1867-1872. I believe thay may have been that early, however I also think they were made for much longer...perhaps as late as 1878! The company was sold to Richard Braeg ,Albert Dallemand ,and E. Frank.in 1872, but I believe these flasks continued to be produced during the time between that time, and when Jaines Walker joined the firm in the late 1870s. The horizontal embossed flask, and the Fine old Cognac were not being produced after 1872 in my opinion, but the vertical Wormser exhibits charactaristics of being very early ( large tops,dark chocolate/olive, olive green, to yellow green) They also have strong crudity. I have also seen examples which seem to have extremely bold embossing, and tiny applied tops. These are in plain amber, and sometimes off shades of amber. Interestingly, the earlier examples have typically weaker embossing than later blown specimens, which should be the other way around. If the mold was reworked in the mid 1870s, they cut the letters exactly the same,or the glassblowers in the early part of the run had TB, or COPD,as I have compared them. I would be interested to know others' views on the length of the vertical Wormser run. You do not find them in my neck of the woods, or at least did not before 1989 when I dug in Oregon.
Posted by Westernglassaddict at 2:50 PM