It may seem strange to many of you that so many embossed glob's have been located in Mormondom.

The wholesale and retail liquor industry was thriving in Salt Lake City in the early 1870's,  even to the extent that we have two embossed containers from that era...  S.T. Suits fifth (Walker Bros) and California Wine Depot flask (A.M. Smith).    Although the Walker Bros. became agents for J.H. Cutter in 1872,  the first agent in Utah Territory for Mr. Hotaling's bourbon was Cunnington and Co. 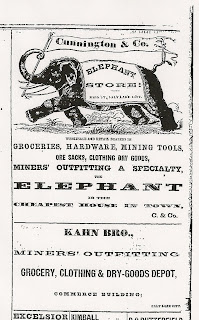 A venerable establishment,  Cunnington & Co. was well established as dealers in dry goods, hardware, clothing, groceries, etc.  Their familiar advertising, THE ELEPHANT STORE,  was seen daily in the local papers beginning in the early 1860's.

As has been mentioned before,  the transcontinental railroad was the spark that set off the mining boom in Utah.  The local merchants, Cunnington, Walker Bros, Auerbach Bros. (recent arrivals from La Porte), Wm. Godbe, and others immediately broadened their horizon and clientele.  Instead of limiting their business to the agricultural based "Valley Saints",  they decided to become miner's outfitters.  Not only sellers of seeds and broadcloth,  they sold picks, blasting powder, fuse, and ore sacks......  and whiskey.   After all,  a 'real miner's outfit' has to have a bottle or two.

The experienced prospectors and miners that poured in were not willing to settle for the local concoctions,  Pop Skull, Tanglefoot, & Valley Tan.  Something more palate-able was in order.   Cunnington & Co. stepped up big, and provided the best .. J.H. CUTTER OLD BOURBON. 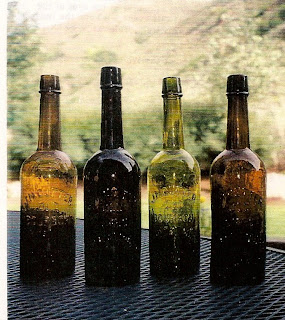 The "boys" were happy!

Years later a few diggers were happy too! 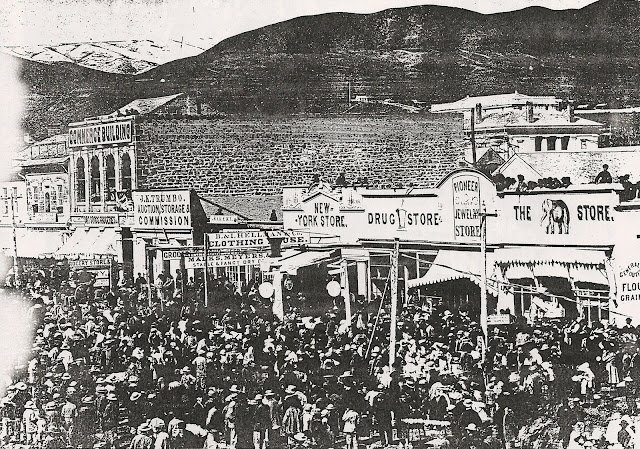 This is a favorite photo of mine..  just to prove that the stodgy old Mormons had a sense of humor.   The crowd is waiting for the festivities to begin.   A tightrope walker is set to perform, maybe on that rope you see just below the Elephant Store sign.   A "one legged" tightrope walker!
Now that I think of it,  maybe there is more to it!   Cunnington could have been receiving their first shipment from Mr. Hotaling this day!!
Posted by soleagent at 12:04 PM