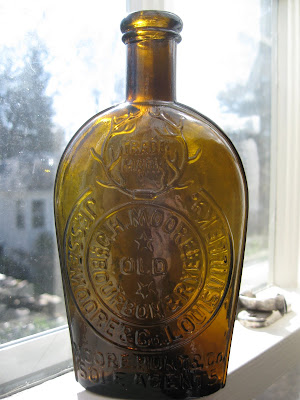 For many years there has been the ever evolving, and controversial "Top 25" for Western Whiskeys. There has even been a recent survey to try and rank the "Top 25" Western bitters. These rankings show collector opinion as to the "weight" of one bottle against another. It sometimes translates to monetary value, but most often is a subjective opinion as to what bottle someone would want to have in their collections compared to others. It is general, and not specific to a particular example. I have seen some lesser ranked whiskeys with spectacular color, and character, and a number 1 ranked example that I did not find attractive at all.
So...here is my opinion of the top 10 Western Flasks. There are fewer early flasks than cylinders, or bitters, so a "top 25" would not work in my view.It also does not include two notable flasks: the A.M. Smith Salt Lake City, and the Dr. Hausman's Bitters. These are hard for me to rank as my desire for each is not at cardiac rising levels, though they are unique in undamaged condition. Remember, this is MY opinion only, and is the product of many years of collecting Western flasks, and having great friends and mentors like Ralph Van Brocklin, Jon Lawson, Dennis Eastley, and Bill Anderson. I would appreciate your opinion as to your "top 10". I would like to conduct an actual survey for other collector's opinions. There are not alot of us passionate for the flasks, and most whiskey collectors have a few, usually to pair up with a cylinder. I love the early open face glob flasks the most, and my list does not include any slug plate examples even though they are usually very rare. let me know what you think.
1) N. Grange (either variant)
2) Wormser Bros. (horizontal embossing)
3) J. Angeli San Francisco
4) Old Bourbon Castle Whiskey
5) J. H. Cutter (crown on shoulder)
6) Jesse Moore
7) Wormser Bros. Fine old Cognac
8) Miller's Extra (small design)
9) AAA Old Valley
10) J.F. Cutter Star in Shield
Posted by Westernglassaddict at 5:30 PM