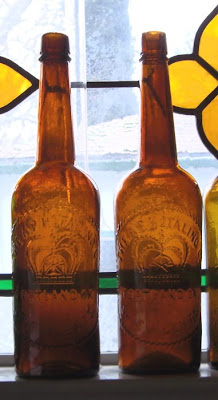 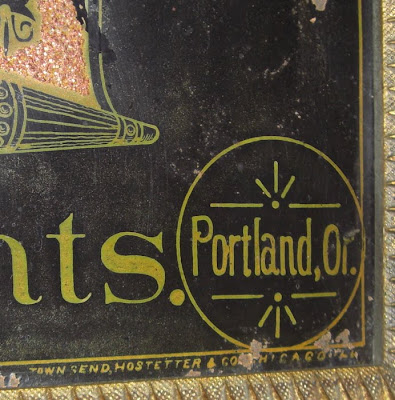 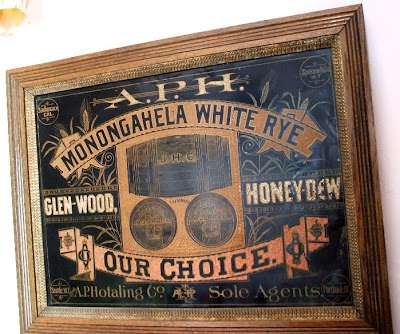 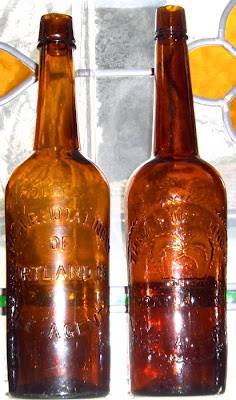 My recent purchase of another Rick-Rack(T-56) has spurred me to share a photo of it and it's predecessor , the open face Portland Hotaling(T-55). Sorry about the quality of the photo, but this old shack has exactly two windowsills, both of which have colored glass in them.

A.P. Hotaling opened the Portland, OR, Agency around 1873, and expanded rapidly in the Northwest area. Shortly after he opened offices in Seattle, W.T., as well as Spokane(Falls)W.T.
It is generally accepted that the first bottle Hotaling used in his endeavors in the Portland area was the T-55, or Open Face Portland fifth. This bottle was probably used to promote his wildly successful J.H.Cutter Whiskey, but could also have been filled with his other big names up there, Monongahela White Rye and Our Choice Whiskies. The Rick-Rack came into use in the late 1870s, supplanting the earlier bottle as Hotaling's container of choice for his products. Hotaling remained in Portland until 1894, at which time he sold his interests to the Rothchild Brothers.

Hotaling also used the more familiar bottles such as the A No 1(T-40), OK(T-41), "Bird"(T-42) and the various molds of the Circle cutter(T-44s), throughout the regions where he had outlets and agencies. It is likely that the earlier of these often seen bottles were used conjunctively with the ones that were blown specially for A.P. Hotaling's Northwest Agencies.
Posted by Mike Dolcini at 10:12 AM