And so if a glop top has a star on the base and those funky little curved legged "R"s it must be a San Francisco blown bottle, right? So, how come this whittled to death glop top Spruance with the star and the R is a blood red bottle that is now commonly referred to as a "German connection fifth"? 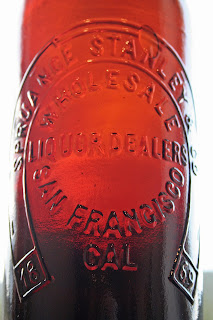 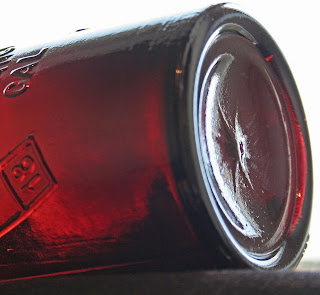 I don't profess to know, but have compared this one that just came in, along with two others in my collection and all bear identical anomalies. All have the star base and identical "R"s. The "hitch"  in the R isn't as overstated as say, a globby J.F. star shield, but it's there just the same. There is a substantial difference in height in one of them (one is an inch shorter than the other two, and no - it's not been chopped and re-glopped) and there's also a radical difference in color between all three (ranging from a dense oxblood red to a bloody orange depending on the bottle) but therein ends the dis-similarities.

It's obvious that they all came out of the same mold, although different glassblowers blew and finished them using noticably different batches of cullet.

I've just omitted the lousiest photo from this post and I will post comparative photos tomorrow, showing smooth based and star based straight amber embossing comparisons. I'm not trying to prove or disprove anything, but do want to give everyone an opportunity to weigh in on this issue.

Comparative Photos:
As promised last evening, note the "R"s in the following photos. 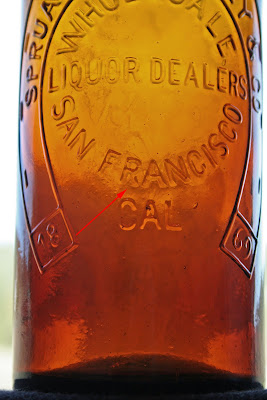 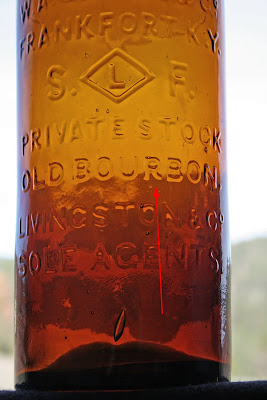 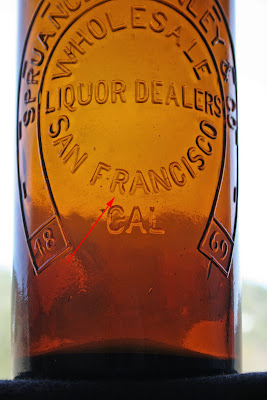 Star Base glop - straight amber
I highlighted the curved "R"s with the red arrow. But, if you look elsewhere in the embossing on the straight amber Spruance glop tops, you'll notice a totally different style of R as mentioned last night. This plot really is getting thick!
Posted by Kentucky Gem at 5:11 PM