Did Holt Glass Works even exist ?? 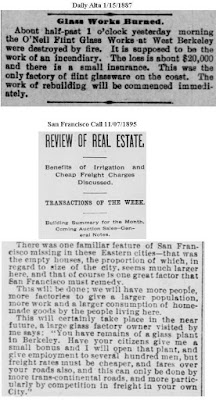 I'm pretty sure it did, but who founded it and how long it existed needs to be more clearly defined. A while back I tried to research Holt Glass Works and came up with rather inconclusive findings. I started my research by reviewing the Berkeley 1892,1894, and 1897 city directories and did not find ANY glass works in the business section, and furthermore I could not find anyone with the last name of "Holt" living in or doing business in Berkeley during those years. Next, I investigated the 1900 census and found a William Holt (born in England) living in Berkeley with an occupation of "glass dealer". After reviewing city directories and census records, I decided to investigate the 1901 Sanborn Map of West Berkeley to see if I could find any clues and located a vacant glass works on the corner of 2nd and Addison Street. Could that be Holt Glass works ??????? Unknown.

I then turned my attention to 19th century Bay Area newspapers and found the following:

March 23 1885 - Campbell Glass Works of Berkeley about to begin producing glass by May 1st.

May 22 1885 - J. Campbell & Co. (proprietors of Campbell Glass Works) dissolved and J.H. Campbell to continue business in his own name. 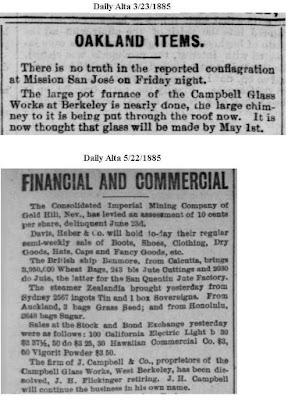 My theory is that the English emigrant William Holt re-opened one of the above vacant glass works between 1896 and 1901. I'm even open to the possibility of Holt Glass Works never existing or being named something else since the phrase "Holt Glass Works" or even "Holt Glass" did now show up in ANY documentation (newspapers, municipal reports, books. ect) published between 1885 and 1922.

Maybe a much more thorough investigation of Campbell and O'Neil glass works could shed light on the true history of Holt Glass Works.

Has anyone researched the years of all the western companies that put out bottles with that base embossed H ? 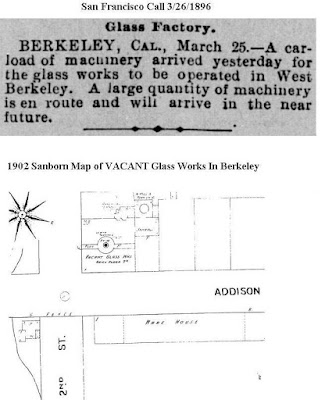