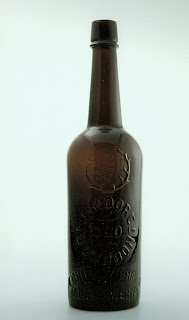 I have to admit, that one of my favorite old glob fifths is the J.MOORE(t-90). The E. Chielovich J. Moore. This is a great looking early fifth, that comes in a royal flush of colors, and they are usually very crude. There are enough of them around that a collector can hope to own one, and heaven forbid, maybe even dig one.

It has been stated in past publications that George H. Moore (actually a nephew of Jesse Moore) sent his hit man, and brother in law, Cornelius Deweese, to San Francisco to increase the sales of the popular Jesse Moore Old Bourbon. ( Hey Elias, don't let the door hit you in the butt on the way out).

After reading an article published by Gordon E. White, great grandson of Jesse Moore, it seems like there is a slightly different story to be told.
Mr. White reports that G.H. Moore went to San Francisco in 1875 to check on the business and found salesman Henry B. Hunt to be the better man, turned the management of the agency over to him, and it was Moore that gave E. Chielovich the boot. Deweese came in a bit later in 1875 to oversee the agency. They took Hunt on as a partner in 1876 and that partnership took over the distribution of Jesse Moore whiskies out of San Francisco. Deweese, the silent partner and overseer, stayed in San Francisco until 1887

Henry B. Hunt sounds like an interesting fellow, read the clip from Wilson's Spirits of the old West. He certainly found favor quickly with G.H. Moore. I guess "upwardly mobile" is the present definition for a brown nosing, back stabbing salesman, that gets his boss canned and takes over his job. Who cares if he did such a great job!! Sorry, I like ol' Chielovich. I hardly know a thing about him, but what's not to like. I guess it's that bottle!! WOW! It must be that pre-1875 thing again.

Ol' Elia Chielovich really did try to do a decent job. I have found his name mentioned as a saloon proprietor/owner in 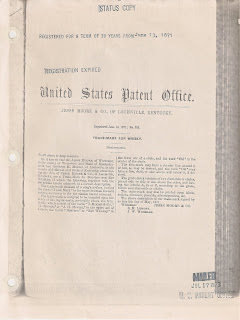 several early Nevada boom towns. That seemed to be his gimmick, he went to Hamilton and to Pioche and probably other Nevada towns and opened saloons that gave him a retail outlet for his J. Moore whiskey. He must have had a presence in or around Columbus or Teels Marsh, as his fifth is prevalent in this area as well. Austin, Nv. is J. Moore country, and of course Virginia/Gold Hill... major J. Moore country. Sprucemont, Nevada, another early town, is littered with broken J. Moores. I guess this saloon thing was not uncommon. Our man Jno. C. Morrison had a saloon on Main Street -Columbus. In case you wondered how those Clubhouses got there.

J. Moores are widely found in Utah. There has been a long standing story that 5 whole J. Moores came out of construction site in Salt Lake in the 1960's. They were dispersed by a local bottle dealer. There have been quite a few broken ones found in Alta, Utah. Southern Utah produced several broken ones and a beautiful mint greenish amber example. One whole one and a pile of broken ones were found in the northwest part of the state. S.L. Tibbles, a saloon operator and liquor dealer in the 'Hell on wheels" town of Corinne advertised J. Moore whiskey in 1872-1873. William Driver, a druggist from Ogden, Utah, had shipments of product from Chielovich in 1875. That 7 year old bourbon would certainly be a good cure for 'stiff elbow'. 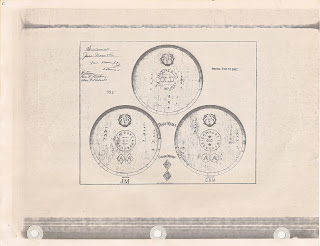 I can't begin to acknowledge all of the California locations that J. Moores have been located. Or if they have been found in Oregon. My point here being, if Chielovich did such a bad job of distributing, they sure seem to be all over the west. I think he got "nudged" out just before the brand really took off. "Thanks for all your hard work, see you around". 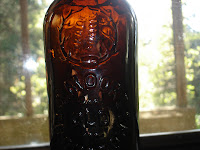 Pioche was a rollicking town in 1872. The Cosmopolitan Saloon is advertising J. Moore in Oct. of 1872. Elia was having a bit of trouble with his lot on Main Street. Guess he got it worked out, his is listed as a saloon operator in 1873. 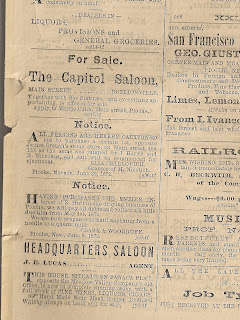 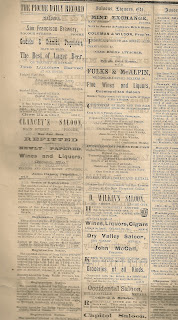 Posted by soleagent at 9:27 AM