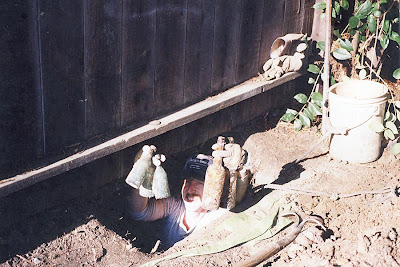 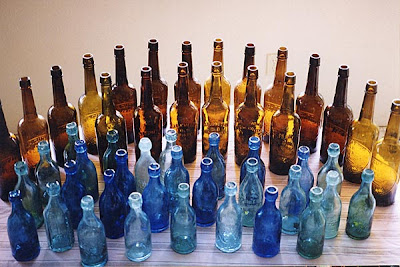 It was almost 20 years ago when I dug this bottle. It
came from an area where I had accessed all but one
70s house on the entire block (14 yards) over a two
year period. The one place I tried for over a year to
get into sat in the middle of the block, it was a
large two story Italianate rental. Each time I asked
it was the same story from the renters; "You'll have
to talk to the property management Co." I was hoping
over time I'd get a loose tenant permission but it
wasn't happening and my patience was running out.
Being in this yard was key because it contained
access to a back property line for a house facing the
opposite direction and two side properties only
accessible from this one yard and all from the 1870s.
Back in those days there were so many un-dug yards
and permissions so easy to get that rarely would I go
far out of my way for a permission. With fewer &
fewer places left to search I ended up one day going
in to see the owner of the management company and ask
about a little recreational privy digging. The owner
turned out to be totally cool guy and the bonus was
he liked bottles. Permission was granted so we
started in. We dug there for a full week and got 7
holes for three different properties. After a couple
of days it started feeling like a job where we'd
arrive by 8 in the morning and work all day for an
entire week. On the last day my buddy Jack was in a
hole digging and I was on top being rather bored by
not doing anything. I decided I'd take my 8' probe
and shove it down all my 6' probe holes I made
angling under the back property earlier. On about the
third shot it was; snap, pop, pow, a deep one under
the back neighbors fence where the trash started at a
little over 6'. There was an area between the fence
and a slab just wide enough to pull a bucket through
but it was also 8' deep and 6' under to the goods. My
friend Jack asked: "How in the hell are we going to
dig that one?" and I said "Just as long as you can
pull buckets we're going to get er done". Down we
went 8' and then started going under. At about 3' in
I hit a big clunk, it was a very nice crude old
circle Cutter in a deep amber color with a huge top,
first bottle.

The hole ended up producing 20 whole
embossed early 70s 5ths and 29 early blob sodas.
There were dozens of busted 5ths and sodas in the
hole. It almost appeared that the guy that consumed
the stuff was mixing the soda with the bourbon. The
hole ended up producing 14 circle Cutters, 1 John
Gold Dust, 2 Mid Crown Cutters, 2 Shoulder Crown
Cutters & 1 S.H.M. What a friggin great hole it was.
Intrigued by the volume and quality of the bottles I
researched the property and found out the town Judge
had resided here some 110 years earlier. Out of the
14 circle Cutters 9 were dead mint. They ranged in
colors from light amber to dark and one was olive. I
sold the olive one like a dumb shit because I was
digging so many bottles back in those days it felt
like it would last forever.
A friend of mine
purchased the olive colored bottle and recently
brought it to me to run on eBay for him. It's
currently listed and ends on 8/12 if you'd like to
have a better look at it, item #270438875628.
She's a beauty!
http://www.oldwestbottles.com/
Posted by Golden Plantation at 9:36 PM