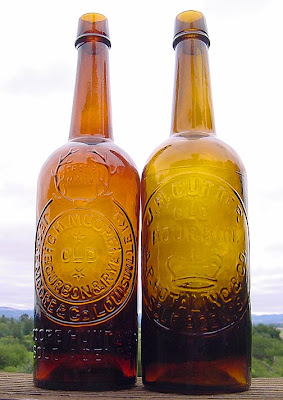 Since the Whiskey blog came online back in January of this year I have been wondering how much effect it would have on the value of the western fifth. By that statement I mean will all the hype and discussions about certain whiskies make them more desirable and thus more valuable?

Seems to me that question is being answered almost daily on ebay. Take for example the Circle Cutter (Thomas 43) that just closed on ebay last week. Described as "real nice olive amber colored glass" and "There's a lot of green in this one boys" sold for a whopping $496.00.
That's, in my opinion, about $300 more then it would have sold for before January of this year.
Do ya think the old whiskey blog influenced the price of that "olive" fifth?

Also on ebay this week is a Teakettle fifth with a starting price of $850.00. The Teakettle is one of the most desirable "common" western fifths out there and this example has yet to receive a bid. Teakettle's, right now at 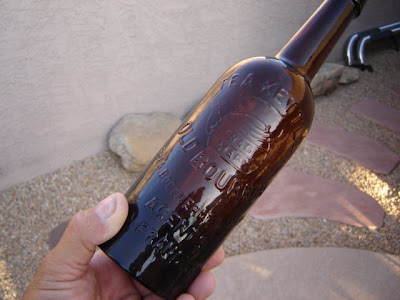 shows, are being offered in the $800 - $1500 range, depending on crudity. Why hasn't this bottle received a bid? The seller says it has "a pinpoint size stone with 2 microscopic tails". I for one, do not believe that this manufacturing flaw is the reason it doesn't have an opening bid. Heck, the Teakettle has yet to be posted or discussed on the WESTERN GLOB TOP WHISKEY site. All it would take is just a small post on the site and a few comments and this bottle could go through the roof.

Another Circle Cutter listed on the bay (Thomas 44?) closing on Monday the 16th is sitting at $185. Described as "Killer Light Honey-Amber Color with some nice transitional shades of medium to light amber throughout (as seen in the pictures). Decent whittle, solid strike, crude mold seams, and a nice overall example of sparklematic Western-blown glass! Nice applied top featuring a crude dip in the glass along the top of the ridge". With a day left of bidding I 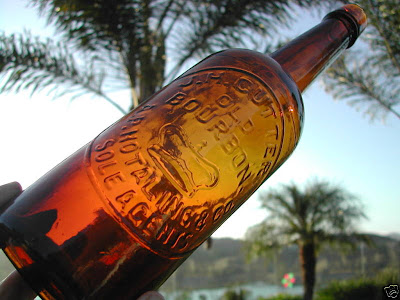 would imagine this bottle will go way over $200.
The only thing that bothers me about this bottle is the palm trees in the background. For some reason my mind does not put together the old wild west whiskey fifths with palm trees. I know, its me, but I just can't get by this.

And then there is The Bottle Vault. A Circle Cutter ( Thomas ?) he had listed on ebay just sold to some gambler for a hefty $260. His pictures and description of the bottle left a little to be desired: "You are bidding on an old and authentic nice amber glass handblown Gloppy Top J. H. CUTTER OLD BOURBON whiskey bottle, from A P HOTALING & CO SOLE AGENTS (of SF CAL). This classic Western Whiskey bottle stands 12" high". No mention if its a 2 or 4 piece mold or if it has A No1 on the reverse. Pretty sketchy description for this old collector to lay out $260.
If you are looking for that special western fifth its time to bite the bullet and shell out the cash. Waiting until after it hits the whiskey blog, as a post, is only going to cost you more of your hard earned money. "There's a lot of green in this one boys"
Posted by Rick Simi at 6:00 AM