Here are a couple of containers for Jesse Moore Old Bourbon from the Moore, Hunt Co.

As has been bantered around on this blog, Chielovich was replaced as agent for Jesse Moore Whiskies in 1875. Hunt was brought on board as a partner in 1876. 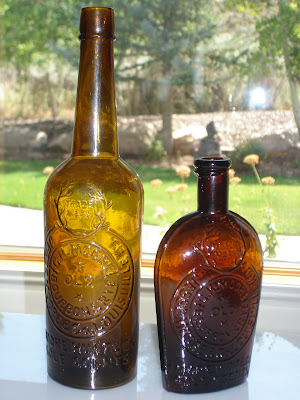 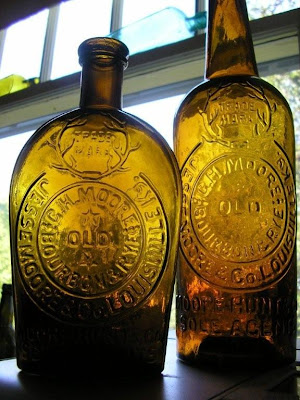 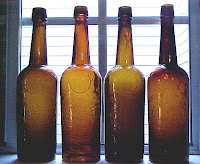 A group of non vented Jesse Moore fifths (t-94) from the
A.P. Collection. All were dug by him! The non vented variety were probably in use approx. 1876?-1878. As was commented on, notice the fairly tight color range for this fifth. Was George Moore that fussy about the bottles used for his product?

This is the glob fifth we all cut our teeth on. They still look pretty good to me. Nice large top, and all of that writing. Probably in use from 1879 or so through the mid-1880's.

For collectors that haven't really ever paid attention to the difference in the two varieties of the Jesse (t-94) fifth, see if you can find one of each to compare, side by side. That big air vent makes a large difference in the overall glass character of the bottle.

We need a photo of the whittly red amber version of the bottle. Anyone have a nice globby red amber?
Posted by soleagent at 11:29 AM