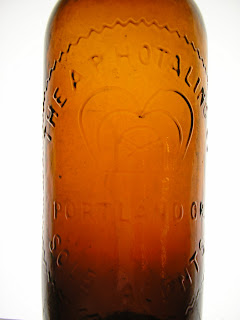 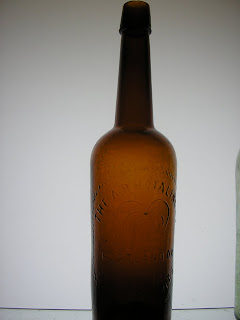 In the 35 plus years I have chased Oregon glass (Hey, someone has to!), I have had an opportunity to examine, and own some very beautiful whiskey fifths, and flasks. Oregon has comparitively few early whiskies than California, and all are very scarce to rare. One particularly beautiful fifth to me at least is the Portland Hotaling "rick rack". These bottles were produced in the early 1880s, and are a great reminder of making one's mark in the marketplace. This bottle comes complete with crossed swords, a large crown, and that unique zig zag design around the full face embossing. There are two versions of this bottle, one with bold, and thick embossing, commonly called the earlier variant ( T-56) these come by and large in the same medium amber coloration, and skinny applied glob top. I have not seen this unique lipping treatment on any other fifth, and the charactaristics, as well as the consistency in color of these scarce bottles, indicate extreme quality control in their manufacture. These fifths have been dug in Oregon, Washington, and Idaho. I am not aware of an example being dug in California, but would be interested to know if this is true. One version that you do not see very often is the "light rick rack". This variant is extremely rare with maybe 6 known in any condition ( T-57). Since John Thomas's first book on whiskies, this was considered a later bottle (1884-90). I have doubts about this. I have never seen a tooled top example as claimed in the book (have you?), also this bottle is much more tradional in profile, lip treatment, and extreme crudity to indicate it is actually earlier than the more commonly seen rick rack. Interesting that the heavily embossed version is much more common with perhaps 30 or so known, and more elaborate, and widely distributed. Why change the mold, top, and embossing to a much less fancy bottle when the one type was selling so well? Why so rare? I have compared the T-57 with many T- 56s and the T-57 blows it away in every aesthetic area except detail of embossing. To find a T-57 with a strong strike is super tough, since there are not a bunch to go around as it is. If you are fortunate enough to own one of each, compare them, and see which one looks more like an early whiskey to you!
Posted by Westernglassaddict at 4:25 PM