This article submitted by follower -- "CASTLE" 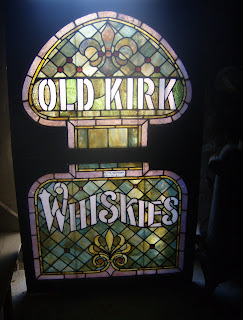 Atillio Moretti had a long career in San Francisco as an artist, fresco painter, and interior decorator.

Detlef Sammann was a prominent artist who decorated several rooms in the White House during President Harrison's administration. He was an academic painter in the California Impressionist style and exhibited at the Panama-Pacific International Exposition.

Included in their stained glass commissions is the window over the entrance to the Stanford Memorial Chapel.

As of Friday April the 20th 1906, San Francisco was still on fire. The Great Earthquake had happened two days earlier, but the Fire (or fires) that devastated the city were still well underway.

This is the story of a single building, but one of vital importance to the delicate Western palette: AP Hotaling & Co.'s warehouse at 451 Jackson Street the largest depository of whiskey on the West Coast. Hotaling's warehouse was threatened on the very first day of the fire. This particular blaze was one of the many inspired by rampant and ill-advised dynamiting.

The warehouse was threatened and saved three times. Once by a brave fireman who hacked off smoldering roof cornices. The second savior was a single length of hose from a Navy fireboat off the Embarcadero that pumped sea water eleven blocks to the warehouse. The final salvation was a bucket brigade that slopped a compote of sewage and salt water seepage from the adjacent construction site. The evil-smelling stuff made a steam that was suffocating as it evaporated on the roasting woodwork. But that muck did the trick. The opposite side of Jackson was completely destroyed — but on this Friday, April 20th — Hotaling's Whiskey was saved. Every other stock of whiskey in the city had been destroyed, but Hotaling's — by the grace of God, man, sewage, and the Navy — had been spared.

The burning of San Francisco was greeted by a good many clergyman as divine retribution for its wicked, wicked ways. The fact that houses of worship were incinerated right along with everything else — and that Hotaling's whiskey warehouse was spared — inspired an immortal piece of doggerel by poet and wit Charles Kellogg Field:

'If, as they say, God spanked the town
For being over frisky,
Why did He burn the churches down
And save Hotaling's whiskey?'"

That last line originally read "and saved Old Kirk's Whiskey", since that was the bottling name of the liquor — but somebody at Hotaling's wisely changed the last line of the verse for advertising purposes — and it stuck.

Posted by soleagent at 1:55 PM