I have had an active May and June in terms of Whiskey dealings....I was lucky to dig a mint 1/2 pint Kane, O'Leary flask (No. 33) in Northern California. Weeks later, I acquired the matching counterpart fifth (No. 75) for a bargain of $2,000. The price was too good to be true for the fifth, as I quickly returned it for a refund after finding two annealing checks in rather noticeable locations. It was a super example in terms of color and crudity (especially for a slug plate fifth), but damage is damage – simply too risky of a buy in this economy where glass falls a bit lower down on the hierarchy of needs. I'm going to be patient and wait it out for another nice one, even if its 10-15 years down the road.

We had a BBQ at our house in San Diego the night before the bottle show which allowed for a little bottle-dealing on the side....I picked up two nice J.F. Cutter fifths (No. 46 / Variant 4's) as part of a trade/buy-out towards my O.K. Old Cast 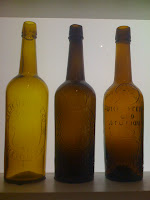 I spent most of my $1,600 at an old-timers table the very next day at the San Diego Bottle Show. I picked up a green Bird Cutter fifth (No. 42), a yellow glob top Lilienthal fifth (No. 104), a crude O.K. Cutter (No. 41), and a light-colored E.A. Fargo fifth that has a sloppy transitional top. The old-time seller also had a nice example of a Durham Whiskey (Footed / No. 93) sporting a sticker of $925 and a golden-yellow-amber example of the Milton J. Hardy Cutter (No. 35) for a reasonable $1,050. I passed on the Durham at his table since I recently picked mine up for a few hundred bucks less 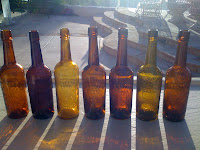 . His Durham had fewer scratches than mine and was pretty sparkly for an eastern-blown fifth, but not quite as crude and whittled as the example that I've decided to keep for awhile.

One of many highlights of the San Diego show arrived in the contents of two 1870's soda bottles. My friend, Dave Garcia, brought an 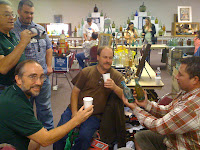 ice cooler over to our sales table with two "Champagne Mead" soda bottles inside – they were both filled with the original "mead recipe." A few of us popped them opened and shared the in the novelty of this once refreshing beverage – and boy, it had quite a kick to it!

I've also managed to pick up a bunch of Jesse Moore fifths in the past few weeks and have begun to realize just how many different mold variations exist amongst the tooled-tops alone! There must be somewhere in the neighbor hood of 15 different variations of the tooled-top Jesse Moore fifths out there! Does anyone really know? Some of the variations are slight (different antlers, different lettering, different bases, etc.), but nonetheless, they are indeed different! One of the late tooled variants was given to me for free from my good friend Jon Lawson, another my dad picked up from an antique store in Median, NV for $22, and I purchased three others at the San Diego show for $15, $40, and $40 based on their shade of color, character, and whether they had a crude transitional tool-top or the normal "later" tooled top.

As far as Circle Cutters go, I picked up two slightly different "Bottled By" variants featuring tooled tops for $15 and $20 each, as part of my collection of Cutters at-large.

One other addition came in the form of a ½ pint Lilienthal Distillers flask, featuring a nice crude tooled-top (No. 39). So I was able to complete my Lilienthal pairing for what the price of the yellow fifth probably should have been alone! But I may try to upgrade the flask part of the equation with an example 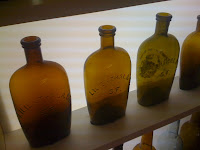 of the Lilienthal coffin flask (No. 40)…if I can find one, that is! My dad, Larry has also joined in on the Lilienthal parade and recently added two tougher colors to his run of High S.F. Union Oval variants (No. 36).

In addition to all my springtime digs and early summer buys, I also had a lucky strike at an antique store's liquidation sale, where I picked up about 50 "fun" miscellaneous bottles for about two dollars each! I can't wait to see what unfolds between now and the National Show in August!

Posted by soleagent at 6:26 PM