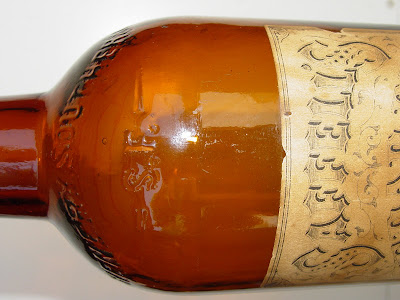 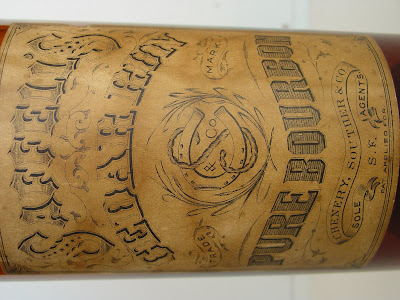 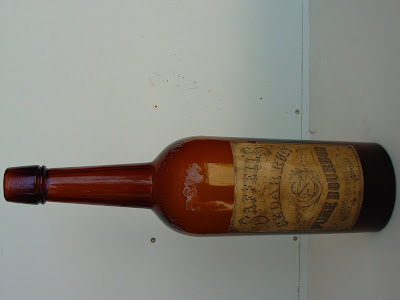 My first attempt at posting! Here is a labeled fifth that I have had for a long time. Embossed "CHENERY, SOUTHER & CO. S.F.", this is the wavy line variant. A fairly rare bottle, but not very desirable due to the limited embossing. Although produced in the 70's, this bottle is well made and does not exhibit much crudity other than some nice stretch bubbles in the neck and a few other scattered bubbles. What makes this fifth a looker is the nice early label. Unlike the fancy and colorful labels found on some of the later tool top whiskeys, this one is more typical of the early labels found on bottles from the 60's and 70's. No color on this one, but actually, pretty ornate lettering which reads as follows: "SAFFELL'S / CEDAR RUN / fancy monogram and TRADE MARK / PURE BOURBON / CHENERY, SOUTHER & CO. / SOLE AGENTS S.F." This bottle turned up in a Norm Heckler auction a number of years ago along with a bunch of tooled top western fifths that were all sold in lots of three. Must have been a small collection from the West that was consigned to Hecklers. Bob Barnett purchased every lot except the lot that contained this bottle! I have only seen a few of these for sale over the years, in both variants, so who knows about how many of these are in collections?

Sorry 'bout the lousy photos! Was not able to rotate them, maybe better luck next time!
Posted by DENNIS ROGERS at 1:49 PM