A Barrel Fifth from South of the Border!?!? 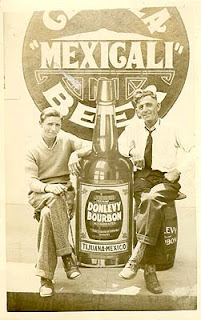 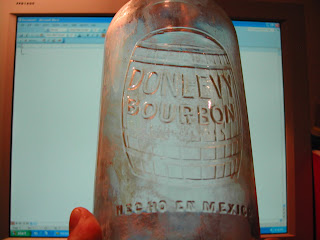 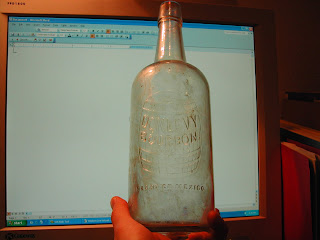 Here's a wild one for ya....
I know this blog is called, "Western Glob Top Whiskies," but I thought those of us who like "picture" fifths, Barrel Cutters, or anything else that's unusual or weird, would still get a kick out of this one (even though this bottle hasn't had it's 100 yr. old birthday just quite yet)!
Earlier this year, we unearthed this very unusual Bourbon bottle that must have made it's way across the U.S./Mexico Border just before or perhaps during the era of prohibition in the U.S. (as drinking in Mexico became the "legal out" for any U.S. citizens who wished to keep their habits up to speed).
It is embossed: DONLEVY BOURBON / AGUADDIENTES / HECHO EN MEXICO
The bottle is machine made, and likely a pre-prohibition fifth from the middle to late teens. Nobody here in San Diego has ever seen or heard of this fifth before. It's a total oddball!
Upon my initial research, I was able to discover an advertisement (taken from an early post card) that proves this bottle to not only be a Mexican fifth, but a fifth that hails from Tijuana, Mexico!
It makes me start to wonder about the following things: