Fooling around here with the three related Cutter bottles that collectors sometimes get mixed up on. The commentary that came up on the (pre 75 gang) post got into the dates of usage of these bottles. I am not sure when they were used exactly, but we can probably get a good idea from the digging experience that our readers bring to the blog. The O.K. and A No 1 trade marks are registered with the state of California in late 1881. These bottles are in use before that date, and the O.K. Cutter long after that date. When was the beginning for the BIRD Cutter? As early as Dec. 1873 according to Thomas. I don't think they started that early, but I can't prove it positively. I have found them in towns that were at their peak in 1876-1882 time frame. What does the bird stand for? Is it in reference to the #1 grade of Cutter whiskey? Unfortunately no trade mark information is available for these bottles from the mid '70's. As 'Old Cutters' has mentioned, the archives has seen its share of interesting items disappear over the years. I want to think that there is some documentation on all three of these bottles from the mid '70s. It is not available currently, if it ever existed.

Did the O.K. Cutter(t-41) replace the Bird Cutter(t-42)? They both have the similar phrase "Cutter OK Whiskey" or "A.P. Hotaling's O.K. Cutter Whiskey" on the reverse in different patterns.

The A No 1 Cutter(t-40) is the oddball. Sure seems redundant, with all the Circle Cutters that say A No. 1 on the reverse.

Here are some picts. to check out and compare these 3 bottles. 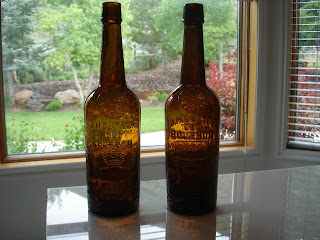 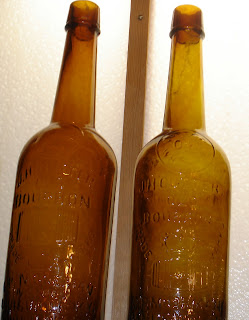 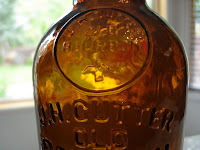 I don't know what the bird signifies. 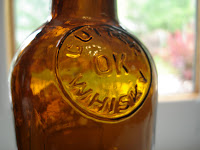 Probably something to do with the #1 grade of Cutter whiskey -- the O.K. Whiskey.

Here is the O.K Cutter(t-41) from Auction #47 - American Bottle Auctions. A nice example with very strong embossing. Notice how heavy the "slug"area is around the crown. I have seen some that the "slug" area is even more defined. 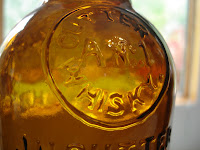 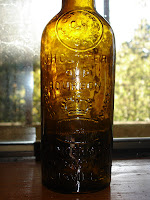 O.K. Cutter - Aaron's is one of the nicer examples that I have seen of the O.K. Lighter yellow amber, whittled and full of swirls. 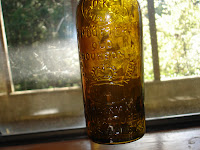 Check out the "slug area" on this one, not nearly as pronounced. This particular O.K. has the look of the A No 1's . Did the O.K. and the A no 1 come on the scene at the same time, with the A no 1 being dropped quickly. Redundant bottle. ?? 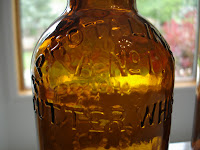 Everything is the same as the O.K., except the lettering A No 1. They are two separate molds however, the lettering slightly different. 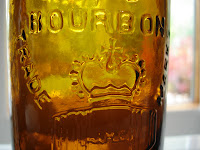 The A No 1 crown is "slugged on", but you have to look to look close to see it. I am not sure about these marks around the crowns. A No 1's lightly "slugged", O.K.'s "heavier slug", some very heavy. 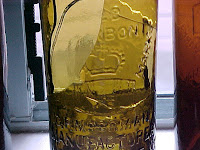 Here is the ultimate O.K. submitted by 'A.P.Hotaling'. Certainly the best color I have ever seen in one. I have seen Bird Cutters in a similar coloration, but I have not seen the A No 1 in a color like this. They seem to be in a narrower band of lighter amber to yellowish amber.

Here compared to the typical O.K..

Posted by soleagent at 4:13 PM