Here is an interesting bottle that raises a few questions. One question is where are they coming from??? East or West. 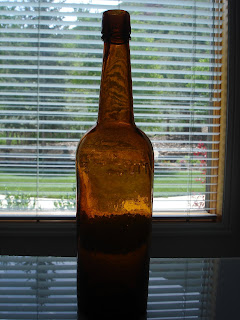 Has anyone dug one of these shoulder embossed 6ths in the West?

G.O. sent me an alert that an example of this bottle was on Ebay a couple of weeks ago. It was a good looking bottle, had a bit of greenish color to it. My example is orange amber which seems to be the standard color. The ebay example was being sold out of Penn., and the seller had a couple of other eastern glob cylinders.

I have seen 8 or 10 of these over the years. Mine came from the Vegas show 15 yrs ago. Seen them for sale at Reno. Are they all migrating in from the East?

I guess the possibility of this being a California version of the Suit's bottle has been on the table for discussion for a number of years. There are trade cards that exist advertising S.T.Suit with Booth & Co. /Sacramento; W.W. Dodge & Co. /San Francisco listed as "General agents for the Pacific Coast". Did Booth/Dodge use this shoulder embossed bottle?
My guess is no, probably just labeled only. 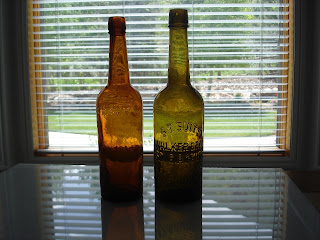