May has come and gone and I didn't add anything to my collection, how about you? Nothing for sale on ebay, I mean NOTHING! The S.T. Suits, sixth in yellow amber with a slight olive tone sold for $552.77. It was a better than avg. example. Same seller had an eastern Blakes, Adams-Taylor for sale, but I didn't see the closing price on it. That is all that I noticed for the entire month. Grim! Lance, how did you do on the extra Crown Shoulder Hotaling you had for sale?


Maybe June will be better for us globby enthusiasts, a couple of shows this month. San Diego Show on June 13th, and the Oregon Bottle Collectors Summer Show in Aurora, Oregon on June 12th and 13th. If you need directions or contacts, shoot me an email and I will get right back to you, or click on the Federation link and check out show dates.


I browsed through the Glassworks Auction preview, not usually a place for western globs, but sometimes for western bitters. Three Hostetter's lots was about the extent of western glass in there.

(** Note: Just received Bruce Silva's most recent list of whiskey bottles for sale - June 09. A number of globs on the list. If you don't have his email address or phone number, send me an email soleagent@aol.com and and I will pass it along. He will get you on the mailing list. If I was a bit more computer savvy maybe I could just link to his Word document. )

So, I guess y'all need to get out and dig up something if you want to add anything... take a cue from the "Moleman". Anyone else want to fess up and tell us what they have found this year?

I made a trip north of Elko, Nv in mid May. Blake and I thought we would try the area north of Tusky town, you know, the town where a broken Club House was supposedly found by some one's -brother's-son-in-law's-dad's- best friend's uncle. Thomas makes mention of this rumored find in his book. Rumors, rumors, I been suckered into Cornucopia a couple of times. It had been a quite a few years, a new book on Nevada ghost towns was the latest "magnet". New information, a couple of new photos, ... great let's go!! Sure, by the way, did we neglect to tell you that a real recent mining operation pretty well leveled and obliterated whatever was left of 'ol Corny. And they're worried about a few bottle diggers. We could hardly find a shard of glass, let alone a place to dig. 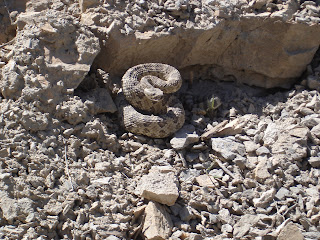 Cornucopia - horn of plenty, fruits, vegetables, flowers, plants ... Garden of Eden-ish.... well gents - the Serpent has taken over the garden:
Posted by soleagent at 7:50 AM