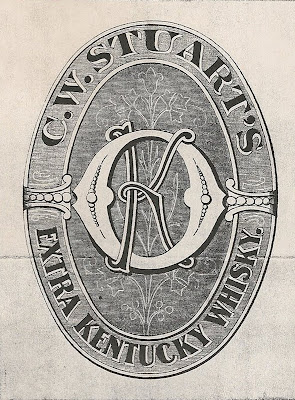 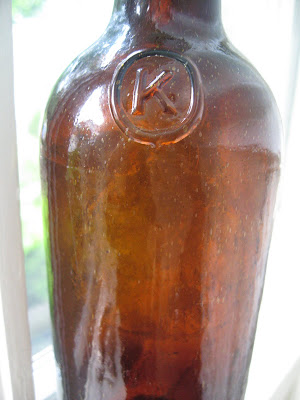 For years, I have wondered about the C.W. Stuart's fifth. It seems to be surrounded in mystery and conjecture, with parts and pieces of different moulds and glasshouse markings on the base (C&I)...the dates of distribution have even been in question, but that has recently been narrowed down ( mid 80s). No indication of the agent embossed...on and on. These are found in the Pacific Northwest occasionally, so are of special interest to me. I know there is at least one example with a tooled top. I am 100% convinced it is Western blown.

Thanks to Bruce over on the Tooled Top Gazette, I found a piece of evidence as to what is likely the most often speculated aspect of this bottle, namely the "K" in a circle on the reverse shoulder. It has been theorized it is "Kellogg" , but the dates just do not add up for this to be the case in most opinions.

I believe that while I am probably behind the curve, and everyone already knows this, the "K" in a circle is simply "OK", and not the agents initials. See the label from Bruce's site, and form your own opinion. We know that this is a Wilmerding product, but I believe that Kellogg was not in the picture during the time this bottle was distributed.
Posted by Westernglassaddict at 8:47 AM