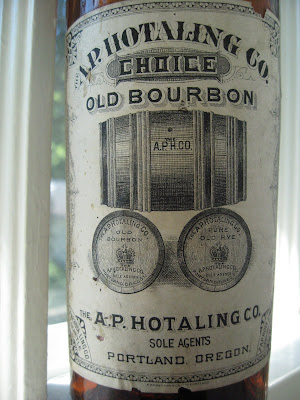 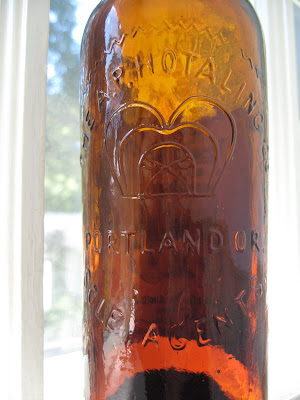 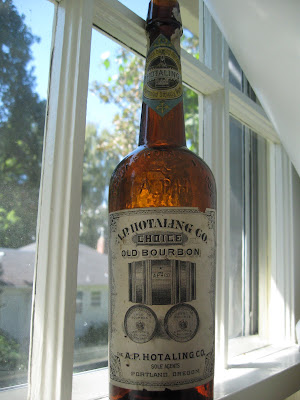 I have collected Western glass for close to 40 years, and really have an interest in Oregon bottles in addition to all historic Western glass. Awhile back, I became aware of a whiskey bottle that had recently been found during a remodel. The bottle, I was told, fell 25 feet out of a ceiling, and landed in a pile of lathe, insulation, and plaster. It bounced across the floor and like the song involving a meatball, almost rolled out the door.
Being a non bottle collector, the gentleman described the bottle as a brown whiskey from Portland, Oregon, and was from A.P. Hotaling. I was hoping it was an early glob top, but concluded that it was likely a nice label only fifth, and I would be interested in looking at it. The photos came on line, and I could not believe my eyes! It was a fully labeled, Portland Hotaling "Rick Rack" glob top, and it was the RARE second version! Now my heart was really pounding, as I have never even heard of an Oregon glob fifth with a label, let alone on of the rarest open face Western whiskeys. After much back and forth discussions, we agreed to meet half way between us (7 hour drive each), and when I held this beauty, I was happy to see it beautifully whittled, and in absolutely perfect condition. Of note is the words "A.P.Hotaling, & Co." no less than 10 times on this one bottle !For an Oregon guy, this is a cornerstone piece for my collection. I have asked Mike Dolcini to draft a post surrounding Hotaling's Northwest presence, and distribution. This will hopefully follow shortly.
Posted by Westernglassaddict at 11:22 AM