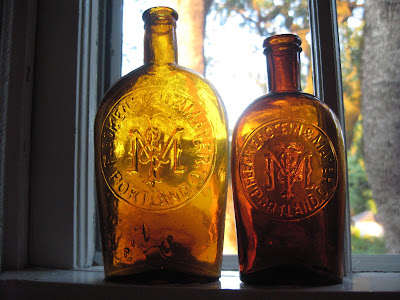 I have periodically featured Fleckenstein and Mayer flasks on prior posts. Here are two very rare examples from this company, which made as many different amber flasks as any Western concern.
These two are both private mould specimens, and date from the early to mid 1880s. The pint is very crude and bubbly, with an unusual lip treatment. There are about six of these in collections, and an additional two with a glob top. The half pint is one that might easily be mistaken for the more commonly seen slug plate version, but upon close inspection it is indeed a private mould flask. These are very rare with about 10 in collections. They have been rumored to also come with an applied top, but I have not seen one. I am not aware of these particular flasks being dug anywhere but the Pacific Northwest, and not for quite some time. I do believe a few different variants have been found in California, and I would be very interested to know where.
Posted by Westernglassaddict at 7:36 PM