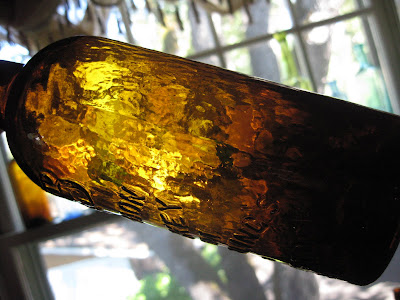 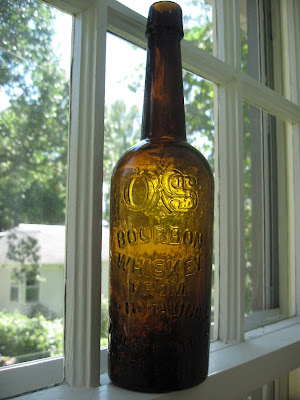 I cannot recall an OPS being featured on the blog, so I thought I would post this example. These seem to come from the California coastal areas mainly, but I have heard of them being found in Nevada. According to Thomas, there have been examples dug in Oregon as well, but I cannot confirm this. Not sure if any examples have been found in the past few years, but would be interested to know just how far these were distributed. What about Washington, or Idaho? This one was dug in Santa Cruz, by a contractor running a trencher. Apparently, this bottle was tossed out of the trench, and picked up by some kids. The late John Thomas "acquired" the OPS from them, and it was one of his favorites. I believe there are about 30 or so in collections, but they sure do not become available very often. The tooled top examples usually have very bold embossing, and as seems common, are often more crude then their glob top counterparts. This one has a very strong strike though, and has some whittle effect. Amazing it is mint given the rough start it had, being recovered in the manner it was. Paper thin glass, you almost get the feeling you could crush it in your hands, it is so fragile.
Posted by Westernglassaddict at 3:30 PM