Not Your "Run of the Mill" Millers 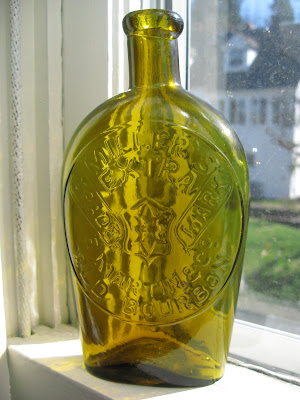 Here is a recent find. A pretty colored "Large Design" Miller's Extra. Lance recently posted his run of Miller's flasks, and showcased some of the colors these popular flasks are found. There has been quite a bit of debate over the years as to whether the "small design" or the large pattern is older. It is still general consensus that the small circle Miller's pre dates the large circle by a few years. They do seem to be found together however. Interestingly, the small circle Miller's comes in green shades much more often than the large circle...not sure why.
It is pretty tough to beat any early western whiskey with a green tone to the glass! I have heard reports of broken small circle Miller's in a light pastel green, almost aqua! What a great find that will be someday when some lucky digger discovers one of them.
Posted by Westernglassaddict at 2:43 PM