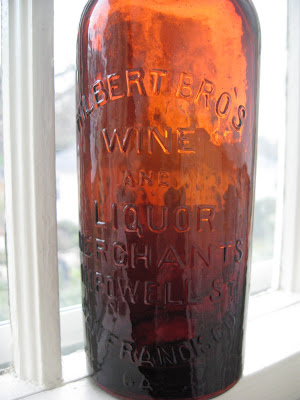 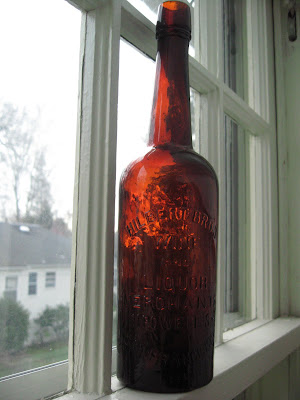 Here is a red whittled glob top fifth that is pretty tough to find. It is one of the 1890s whiskey bottles that for the most part all seem to be very scarce to extremely rare.

According to Thomas, Christian and Fred Hilbert operated saloons in San Francisco beginning in 1890. Their most successful establishment was at 101 Powell St. This is the same address that is embossed on this extremely rare fifth. I also have a pumpkinseed flask with this address embossed. To me there is something special about a bottle embossed with the address of a saloon. This saloon operated until 1896 after which the Hilbert brothers operated mainly a wholesale liquor business from two Powell St. locations. Hilbert Bros. In 1898 Fred Hilbert went to work for Hildebrandt Posner, and in 1903 the company name was changed to Hilbert Mercantile Company, until the entire company was destroyed in the great earthquake of 1906.

I can account for 6 or 7 of these glob tops in collections, and about the same amount of tooled top versions. I dug a front face of a Hilbert Bros. in Northern California in the late 1990s, but could not determine if it was a glob top or tooled top. I also do not know if any have been dug in any state except California. These continue to be very elusive like the N. Ahrens, Cline, and PMSS. These bottles were almost certainly a product of Germany, and in Warren Friedrich's book there are some interesting news paper accounts of the heavy competition between the California glass industry and foreign suppliers. This is quite a story in itself. While this is not an early 1870s fifth, it is a beautiful and historic link to the liquor industry in San Francisco.
Posted by Westernglassaddict at 4:17 PM