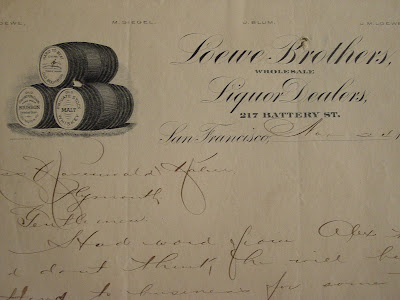 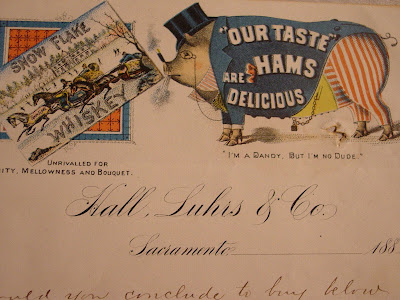 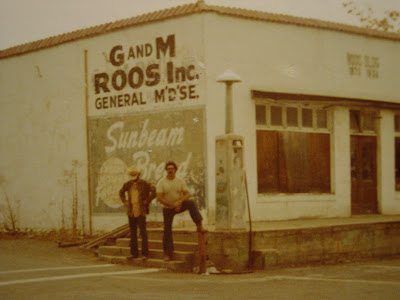 It was November of 1971 and we were driving home after one of our visits to hang out and scrounge with our buddy Mike McMcoy of Coloma (Discovery House Antiques). We spotted the sign for Plymouth, off of Hwy. 49, and decided to check it out. At the entrance to town, we spotted an old building that was vacant and calling out to us! Looking thru the front windows, it appeared that this "mercantile" store had been vacant for many years, and was just full of "stuff", as if someone had just walked out and left everything there. As we walked around the building, we discovered a cellar door on the street side, and closer examination found it to be readily accessible and not locked. After entering the basement, we managed to find a number of old bottles that had been thrown into the crawl space and retrieved as many as we could reach. Nothing great, mostly pottery beers, medicines, pickles, etc. Then, we discovered a stairway that led up to the store, and it was open! After poking around in the store for some time, we came upon boxes full of old paper items; billheads, letterheads, documents, etc. Most of this paper was dated from the 1880's to around 1910. Soon after, we discovered more paper items in another room, but most seemed to date after 1910, so we left it, thinking that it just was not old enough! We loaded up the older paper items and headed for home. After inspecting our "find", we discovered some documents for the incorporation of the mercantile business of "Coblentz, Levy, Rosenwald and Kahn". I don't remember the dates, but among the paper was also documents that showed that this partnership dissolved a year later, with Coblentz and Levy leaving, and Rosenwald and Kahn forming a new corporation. A "Coblentz and Levy" appeared shortly after this time in Portland, Oregon and were listed as whiskey merchants. Could this be the same 2 guys from Plymouth?

My buddies and I split up the items from the find, and I had disposed of all my paper items over the years. Just recently, I was able to acquire one friends share of the find. The bill head from Hall Luhrs was from the 1880's and really colorful. There were a few of the Loewe Bros. letterheads , and they were dated 1894. These were mostly hand written letters, and hard to decipher. The one pictured here states at the bottom "we have bought the business of Wilmerding Co. and about Jan 1st will move to 216 California St.". It appears to be dated Nov. 24, 1894. If there are any other billheads or letterheads floating around out there from "Rosenwald and Kahn", chances are they are part of this original find back in 1971.
Posted by DENNIS ROGERS at 8:27 PM