Since we are talking Miller's
thought I would bring back this old post about the Boukofsky brothers. 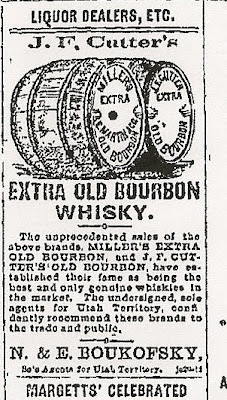 Utah has produced more than it's share of Miller's flasks.  Both large and small embossing circle variations.  Also it has produced many, many J.F. Cutter Extra (Star in Shield) fifths.   Nelson and Edward Boukofsky ads first appeared in the Salt Lake Tribune in 1871.

The Boukofsky's were probably the largest (most successful) of the 4 major dealers of San Francisco whiskies in the Utah Territory market.   If the number of embossed containers is any indication,  they certainly were the most successful.  Miller's Extra and J.F. Extra was shipped throughout the state.  Every early town/ mining district I have poked around has remains of these containers scattered about.

They were also the Utah agents for Baldwin's Superior Hand Made Old Bourbon (S.H.M.)  and McKennas. 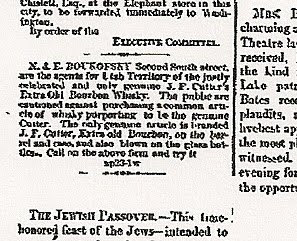 It didn't take long for the E.Martin (J.F. Cutter) / A.P. Hotaling (J.H. Cutter)  feud  to show up in the local Utah papers.  Early in 1872 Cunnington and the Boukofsky's started taking potshots at each other as to which was the "true and genuine' Cutter whiskey.

It is interesting to try and calculate the survival rate of some of these bottles.  Cunnington's ad indicates Hotaling's purported warehouse inventory of J.H. Old Bourbon in early 1872.  Besides all the barrels and casks,  5000 cases of bottled product!    I don't think these would be circle cutters... early 1872!

Boukofsky's owned the market in Alta, Utah.  At least 30 intact star/shield fifths have been found in this lofty mining town.  Probably over 20 Millers flasks.   Cunnington did a pretty good job early on as the early J.H.Cutters with and without crown are found here. 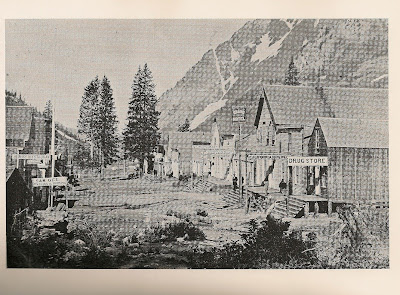 The more famous Utah dealers, the Walker Bros.,  had a hard time selling whiskey in Alta.   They made their pile at the Emma and Prince of Wales mines,  but when they gained access to an early mining claim that basically included the entire business district of Alta,  and threatened to make townsfolk re-purchase their lots or move... that didn't go over real big!
Very few circle Cutters in here,  just a couple of shards of Suits.  Alta was all Boukofsky after 1872.

Posted by soleagent at 1:39 PM