There was a glass works in Utah in the 1880's.   The Salt Lake Glass Works became operational in April 1886.   It was not in operation very long,  but there are a few bottles that can be attributed to the factory that was located west of Warm Springs Resort.


The first mention of the factory I could locate was in the Salt Lake Tribune May 23,1886 which claimed the glass works had 24 employees (men & boys) and was obtaining all of the sand, soda ash, coal, even the clay for the crucibles very near by.  "The works has been providing beer, soda, and prescription bottles,  besides also making up a large quantity of Mason's jars".


Another article on Jan 1, 1887 makes mention of the organization of the company,  "Capital being placed at $10,000.00,  200 shares at $50 each.   T. E. Taylor,  president;  Jacob Moritz, vice president;  John A. Evans,  secretary and treasurer.   Hugh Watson being the manager of the glass works".
"The glass works being located just a short distance west of Warm Springs, and is connected to the Utah Central R.R. by a switch".   The article goes on to mention that the glass works "has a capacity of 300 dozen bottles per day, and is giving employment to 45 men and boys.  The value of the product produced during the eight months of 1886 being $27,000".


An short article appeared on Aug. 15, 1888 under the title of "ANOTHER GLASS WORKS".    The article indicates that another company is looking to build a glass factory in or near Salt Lake City.  The article is vague and it makes no mention of the Salt Lake Glass Works being still in operation or not.  By the title,  Another works,  I will assume that the original glass works is still in operation. 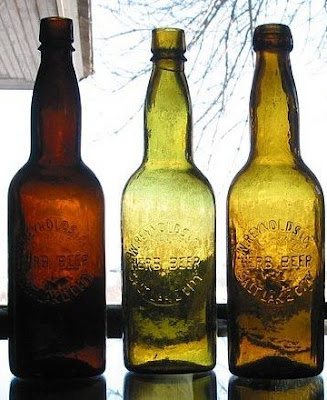 These beautiful Reynolds Herb beers are most likely a product of the S.L. Glass Works.   They come in an assortment of colors and are quite crudely made.  They usually are found with an applied 'double collar' top.  Rarely found with the "Baltimore Loop" style top.
Almost always very whittled and full of bubbles and imperfections.   Other than the embossing style,  they have the look and feel of a bottle made 10-15 years earlier. 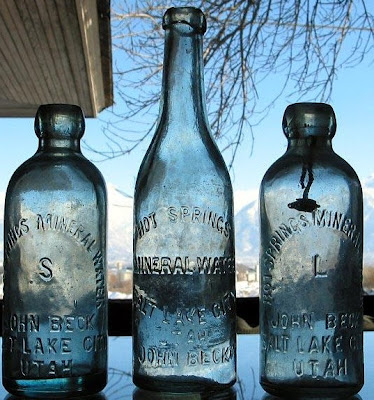 This unusual "round bottom"  John Beck ginger ale is still unique I believe.

Formerly in the Stan Sanders collection.


There are several other embossed "mid 1880ish" Salt Lake hutch sodas that were possibly blown at the S.L. Glass works.   As for the Mason fruit jars,  I am not aware of any identifying marks or traits to separate them from the multitudes.


Any additional information would be appreciated.