Here is a nice old Nevada soda that is worthy of a post.   As I was reading Warren Friedrich's new book  EARLY GLASSWORKS OF CALIFORNIA,   I was particularly interested in a reference to a soda water manufacturer in Virginia City, N.T.
Several newspaper articles that Warren documents indicate a "heavy demand for California made bottles".   Quoting from an article appearing in a San Francisco paper on July 24, 1863, and used by Warren in his book -
"Pacific Glass Works Company have just received two very extensive orders.  One for 20,000 wine bottles from a large California wine firm in this city,  and the other for 24,000 soda water bottles for a firm in Virginia City, N.T., who have already received 600 dozen from the works".
Warren indicates that the first ad appearing for the Pacific Glass Works was on June 22, 1863.   So, in approx. the first four weeks,  the fledgling glass factory has delivered 7200 bottles to the soda water firm in V.C., Nevada,  and has an order for another 24000.   That's a lot of bottles!   Were they all embossed? 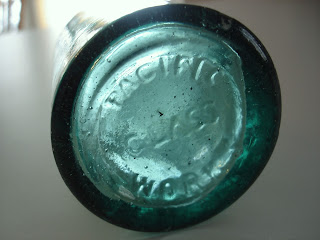 We don't know if more orders for bottles followed up these first two groups,  or if 31000 bottles were enough to carry on a soda business in Virginia City.


I guess we might be able to conclude that the W.S. Wright soda bottles are some of the very first bottles blown at Pacific Glass Works.

Most of the examples I have seen of the W. S. Wright soda bottles are this rich "western aqua" in color.   Other colors exist but are very rare,  and usually damaged.   Many years ago I seem to remember a story of a privy or maybe just a big trash pit being dug in V.C. that was loaded with broken and severely damaged Wright sodas.   I heard many of these broken Wright bottles were in some extreme colors.   Anyone have the rest of that story?

William Wright was doing business at the corner of Mill and B Streets in Virginia City.   His first two orders of  bottles in 1863 may have carried him through the 5 or 6 years he was in business.
Posted by soleagent at 10:38 PM