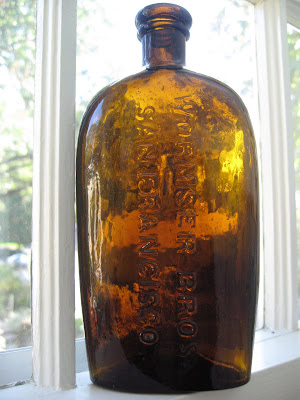 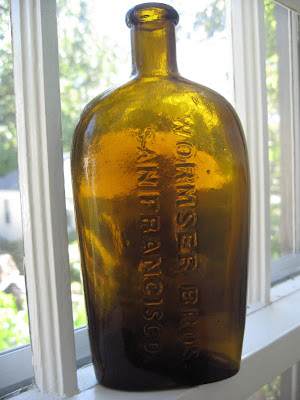 The Wormser Bros. of San Francisco produced some of the earliest Western flasks. Actually, all of the Wormser Bros. variants are earlier than the vast majority of flasks produced and distributed throughout the Western states. I have posted "vertical" Wormsers before, and there have been some amazing colored examples posted by other collectors...but the single roll type top is one that you just do not see every day. Here is an example with nice olive tone, and every specimen I have seen has been this color. I am curious if there was only one batch blown, and they are all this olive toned golden coloration? Also, this single roll top is virtually identical to several of my Miller's Extra large pattern flasks. They were quite possibly made at the same place, and used the same lipping tool. Compare to the very large double roll top example. Quite a difference. This particular flask is also very whittled, which is not the norm for a Wormser. Have there been any of these flasks dug in the past 10 years? I have not heard of even one. I know they have come from the Bay Area, and Sacramento, and of course Nevada, and Utah. I am not sure if any have been found in Oregon or Washington, but I do know the extremely rare "horizontal" version has come from Oregon, Just not by me!
Posted by Westernglassaddict at 4:39 PM