Auburn Report- Whiskies and Other Stuff... 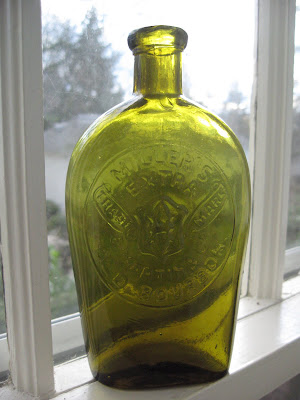 The Auburn show was a cornucopia of vessels this year. In addition to the sweet Western Bitters available for sale ( and some not), there were some great whiskey bottles on tables, and behind them. I saw a spectacular John Van Bergen, and Chalmer's ( sort of a whiskey), a top example of a Snowflake, a PMSS, a Blakes, Non-Crown Cutter, Choice Old Cabinet, Old Gilt Edge, Bird Cutter, a few OK Cutter's, and a nice Teakettle. Early flasks were well represented with a Star Shield, Castle Bourbon, two Miller's large design, and one Miller's small design ( which I took home.Could not resist a green small Miller's) , two AAA Old Valley flasks, a Brickwedel, and a few different Lilienthal's. All in all a strong showing of quality fifths and flasks. The prices were also pretty "affordable" if that can be said for Western glass these days...the Snowflake with nice whittle and character was $3850. I thought that was a great value, but I am not sure it sold at that.

It is interesting that this particular show, and perhaps Reno bring out so much good stuff that one could really get into some financial trouble if not careful. Usually you might find one good piece for the collection at a show, but Auburn had me deciding between several pieces in several categories. I suppose this is a nice "problem" to have! I look forward to next year, and had better start saving my $$$$ now!
Posted by Westernglassaddict at 5:03 PM