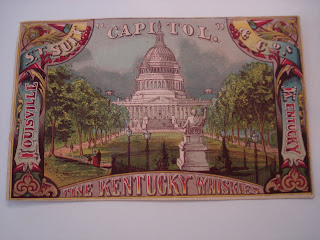 This one is keeping with his "political theme" in the naming and marketing of his Kentucky whiskies.
We have a Capitol, a Senate, and Congress brands.  Others??

Suit purchased a large tract of property in Maryland,  near Washington D.C. in 1867.  This farm later became known as "Suitland".  It is now basically a suburb of our capitol city. 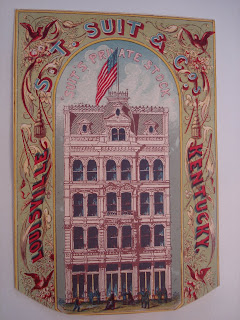 This card has been trimmed of the words "fine Kentucky Whiskies".   This was a fleabay pickup a few months ago.  I don't know what this building is or was.   Possibly his warehouse in Louisville.

Suit attempted to corner the market on fine bourbon in 1872, but ran into difficulty.  His new warehouse, while under contruction in 1872,  had a section collapse due to a design flaw I presume.  Before they could get it reinforced  and shored up a strong windstorm reduced the entire structure to a pile of rubble.

Jordan, Giles & Co. were successors to Suit in Louisville in 1873.

The Suitland farm, and products from that operation,  became very popular in the 1880's.