Kinda sums it up now, doesn't it? Truth be known; it sounds like an accurate description of our annual house boating trip...

As many of you know, I developed a penchant for hoarding and displaying honest labeled western whiskies back in the seventies when most folks were scrubbing the labels off the bottles in order to better appreciate the glass. Me, well, a simple mind equals simple pleasures. It didn't take a rocket scientist to figure out that paper rots away long before glass. And contrary to what I used to tell my wife (back when I was young enough to care), I really didn't read the articles, I just looked at the pictures~ To me, the western whiskey label is the centerfold on the bottle and the rest is, well, pretty much just an article.

A while back I posted an article about the labeled and embossed Tea Kettle that showed up on my doorstep. Never a day goes by that I don't pay my respects to Shea, Bocqueraz and McKee for that bit of sunshine in my collection.

Too tell the truth though, my all time favorite was produced for Jacob Goldberg, Charles and Henry Bowen, and Louis Lebenbaum. The firm of Goldberg, Bowen & Lebenbaum was in business for a relatively short period of time (1892-1895), and were located at 426-432 Pine in San Francisco. The firm was officially listed as Importers of Wines And Liquors and Commercial and Retail grocers. Their grocery outlets were located at 432 Pine and 215 Sutter. 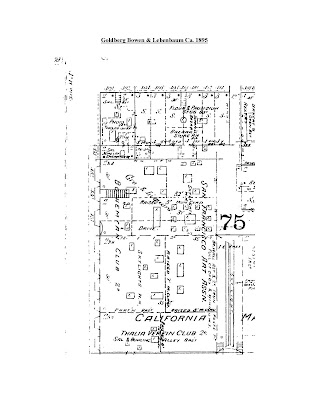 In 1892, they contracted with a German Glass factory, (probably Gerresheimer Glashuettenwerk of the Dusseldorf region) through Abramson - Heunisch Co. of S.F., who were jobbers of bottles, corks etc., etc. and had a run of clear applied top cylinder fifths blown. The bottles were embossed "Bottled By / Goldberg, Bowen, / & Lebenbaum / Importers of / Wines And Liquors / 426 To 432 Pine St. / S. F." A large company logo is located above this at the shoulder at the top of this full faced embossing pattern.

The quality of the bottles left something to be desired and most all display with small flashes or checks and other production related issues attributable to poor annealing at the glass factory. Most of this variant are also heavily whittled and display with extreme crudity. One small production run was produced with a mis-spelling and Liquors is spelled Liquops. 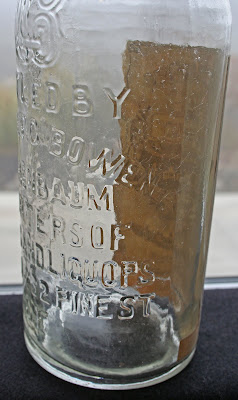 It is estimated that fewer than a half dozen of the mis-spelled variant are in collections at this time.


They contracted with L. Schmidt & Co. / lithographers to have a label plate cut for a new brand of whiskey called Early & Often. The neck label has directions for the "proper use" of the product and the main body label pictures typical Victorian scroll work and the sun rising above the main body of the label. .

There are believed to be two or three of these examples currently in collections. Two of the labeled examples are on the rare mis-spelled variant of this bottle 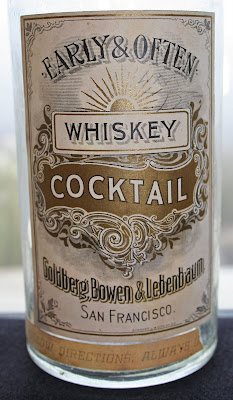 Lebenbaum left the partnership in 1895. The 1897 Crocker Langley directory lists Louis as an importing grocer and tea & wine merchant in partnership with Jesse Meyerfeld located at 236 Sutter and residing at 1522 O'Farrell. 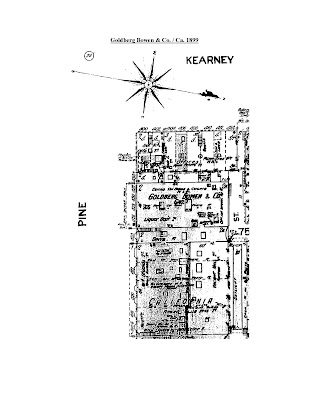 Goldberg Bowen & Co. continued forward, weathering the setback caused by the Great San Francisco Earthquake and Fire of 1906, and remained prosperous as commercial and retail grocers, even after prohibition had forced most of the wholesale liquor dealers in the city to close their doors.
Posted by Kentucky Gem at 10:58 AM