Last evening a very scarce and sought after glop top closed on ebay. Listed as "Livingstone's Western Glob Top Whiskey w/whittling Rare" lot number 360214238214, it should have created a veritable feeding frenzy. Opening at a reasonable $1200~, I'd expected it to bring at least $1750~. Instead, only two bidders competed for bragging rights and it closed at a weak $1225~.

So what the heck went wrong? Simple, lousy pictures

and a lousy description.

Initially described as "Livingstone's Whiskey bottle, a western glob top, with whittling" there was no mention of condition. Later, in a belated attempt to more accurately describe condition, the seller added the following " It is free of chips and cracks with the following exceptions: in response to a bidder request, we re-examined this bottle and found three small nicks or "flea-bites" on the bottom, on the rim. We are including a scan we did of the bottom, to better illustrate these small defects. Imagining that the base is a clock dial, the largest nick is at about 9 oclock. There is a tiny flea bite at 11 oclock and there is one other slight nick at 4 oclock. The football shaped object towards the bottom of our clock dial is an embedded bubble. The only other defect in this bottle is on one side, near the seam, about 3/8" from the bottom, a tiny pin-prick which appears to be a tiny bubble that "popped." A poor quality black and white scan of the base was also attached. 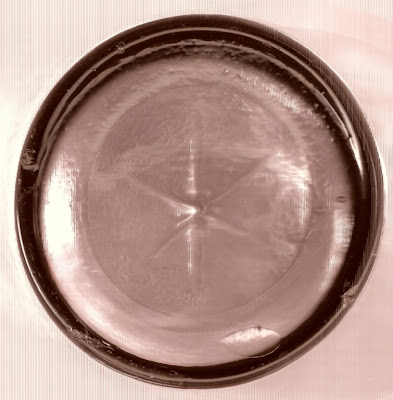 In an attempt to nail down the true condition, I emailed "In regards to the Livingston Blackberry Brandy; You state ""flea-bites" on the bottom, on the rim.

Could you please provide dimensions in regards to the described damage? IE: "largest nick is at about 9 oclock, measures 3mm in length, 2mm in width and is 3mm in depth". I've found that detailed, subjective descriptions take all the guess work out of a purchase.

The bottle is fairly scarce but damage to a higher end western whiskey can make or break the desirability.

I never heard back in regards to this inquiry or a follow up. Was the seller out of town or just trying to let the cards fall as they may? Guess we'll never know. Having been bitten more often than I'd care to admit on ebay, I opted not to place a bid until I heard back.