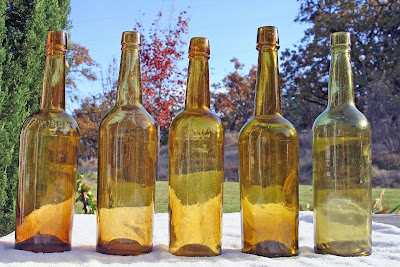 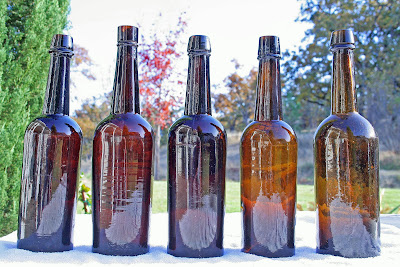 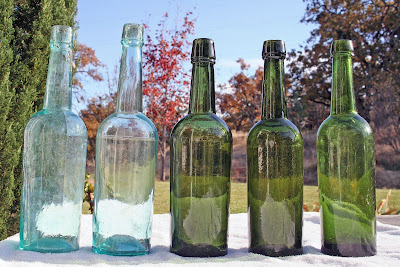 We moved to Southern Oregon, just out of San Jose State, back in 1975. We immediately set out to meet fellow bottle collectors in the area and became acquainted with the members of what was then the "Gold Diggers Bottle Club". One particular gentleman was a western whiskey aficionado and when the club meeting was held at his place a couple of months later, I got the opportunity to view his collection. 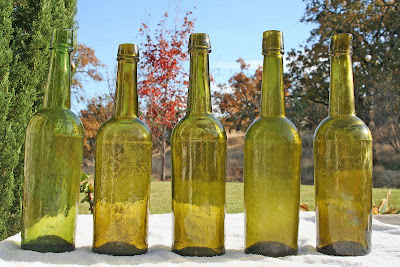 Stuffed away in a dark closet without a light, sat shelf, after shelf, after shelf of glop tops; many embossed, most not. Literally dozens of "slicks" graced the shelves. What was lacking in embossing was more than made up for in terms of crudity and color; especially when they were taken out of their pitch black cavern and into the light~ Sure the glop top Davy Crocket was the star player, followed closely by his Gold Dust, but those early S.F. fifths and sixths had a magnetism that I couldn't explain. The stars on the bases were intriguing, as were the dots, circles and other oddities. Back then, we didn't have two nickels to rub together but I told him to keep me in mind if he ever lost interest or decided to sell. Wishful thinking at best on my part in those days... 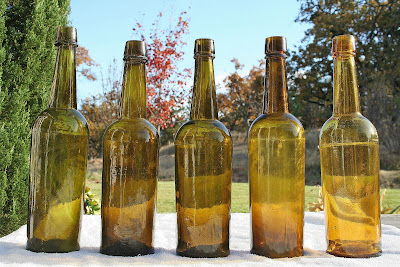 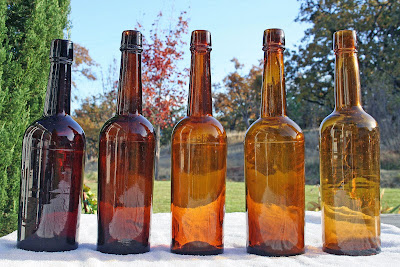 The club eventually evolved into the Siskiyou Antique Bottle Collectors Association and remained intact over the next few years but slowly fizzled as folks moved away, died or lost interest. By the mid eighties, it was a thing of the past. We stayed in touch with a few of the members of the club over time, including the "whisky man". Over the course of the next thirty some years I mailed an annual Christmas card and touched base with him once every year or two. Don't forget, I'd remind him, I'm still interested in buying you out whenever the time is right. And the answer was always the same, NO. 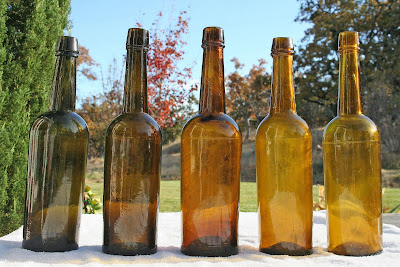 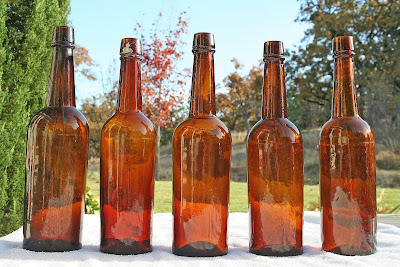 In October of this year I decided to drop him a short letter telling about our daughter, who as a little girl always brought a smile to his face, and about her family and two little girls. And naturally whiskey collecting had to be mentioned. And, since I was on the subject, I reminded him to keep me in mind if and when the time came... 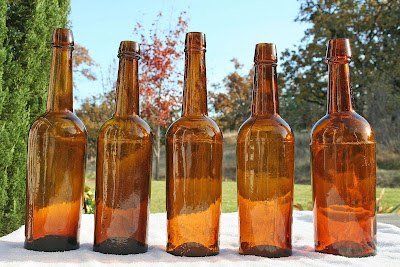 A week after I mailed the letter, the phone rang. It was the "whisky man" and the time was right. Bring the truck, he said, you'll need it! He was right! Two trips later he had the cash (lots of it) and I had the whiskies (lots of them).

Forty years of cigarette smoke and dust and more cigarette smoke can change the complexion of glass in a big way and the fun was just beginning. My witches brew made up of this stuff called "awesome" combined with alcohol and ammonia did the trick and the decades old layer of grime fairly slid off the glass. Amber became old amber, old amber turned to green. Even a blind hog finds an acorn now and then. This time, I found my share.

Crudity was the order of the day and the colors were the icing on the cake, as were the myriad of base marks. Every color of the rainbow was represented. Here's a few examples of the different base marks.