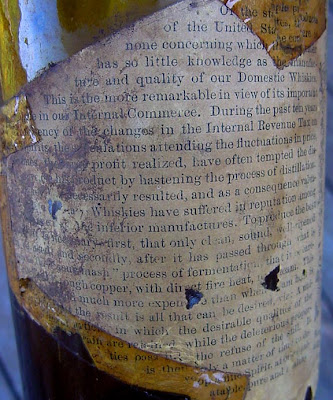 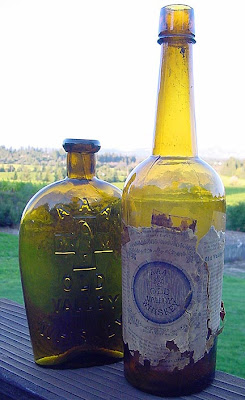 Okay I know it's not a Cutter but I thought that I'd post this due to recent mention of there not being a "AAA" 5th known; or is there? It so inspired me to dig probably the only known example out of a box to share with everyone. With a close matching 5th for almost every early embossed Western flask, there were a few that unfortunately never had the go with 5th mate, the AAA was one of them. I could only imagine it would of been a pretty impressive looking 5th if it did exist.

Several years ago a group of bottles were discovered when an old home in the Sacramento Valley was being demolished. About a dozen 19th century bottles were found laying on the surface under a back porch addition. An 1870s paper labeled AAA whiskey 5th was among the mix that to me was one of the most interesting bottles for what it represented, the missing link. This bottle is western blown, into a 4-part mould in a yellow olive colored glass and has an applied top. It's just a beautiful crude whittled 5th that I'd say dates mid to late 70s.

The killer whittled & bubley green flask pictured with the 5th was dug at the bottom of a tiny 2'x3' wide privy that was only three feet deep and probed like a dud. It was the only thing in the hole besides a busted honeywell and a brick. Belive it or not, when I stuck the probe in the hole for the first time it gently came right down on top of this flask. 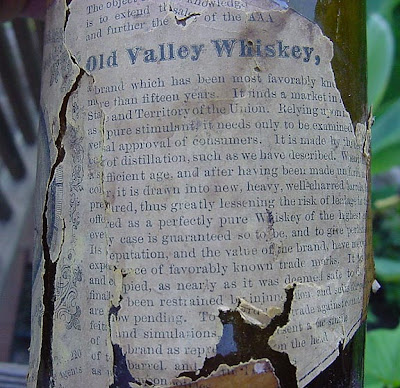 Label depicts a barrel head with the words: "AAA / OLD VALLEY / WHISKEY". Below that it reads: "WE HAVE APPOINTED MESSRS. LIVINGSTON & CO. 220 & 222 CALIFORNIA ST. SAN FRANCISCO SOLE AGENTS FOR THE PACIFIC COAST, AND HAVE GIVEN THEM EXCLUSIVE CONTROL OF THIS MAKE OF BOURBON. COOK & BERNHEIMIER NEW YORK". Another interesting part of the label reads: "THE OBJECT OF THIS PAPER IS TO EXTEND THE KNOWLEDGE AND FURTHER THE SALE OF AAA".

I tried to purchase the bottles over the years but the proprietor was not interested in selling as they were now decorating his office. A few years ago he passed away and I had heard all the bottles were sold at his estate sale, great I'll never see that one again. To my surprise while cursing eBay a while later the very same bottle surfaced again. 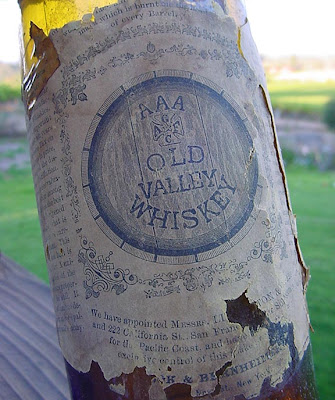 Like many of the better Western bottles being territorial in region the "Old Valley" is definitely no exception. Although there have been finds in other locations, their primary distribution on the West Coast seems to of been most concentrated from the Bay Area up the Sacramento Valley and surrounding foot hills to about Red Bluff. In the 70s I spent a lot of time digging in the Mendocino Fort Bragg area and heard about a great AAA discovery from one of the locals. The fire department guys while digging a horseshoe pit behind the fire house accidentally dug right down on top of a trash pit that netted four beautiful AAA flask. Unfortunately they ended up breaking a couple of them. This was the only find of this particular flask I know of to have been found North of S.F. along the coast Coast. 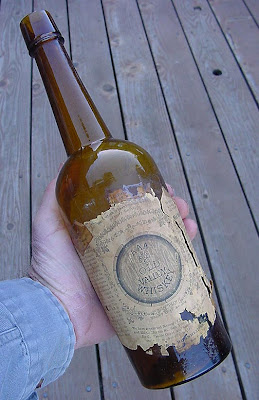 Posted by Golden Plantation at 8:39 PM