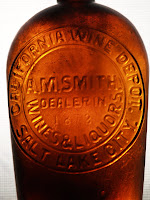 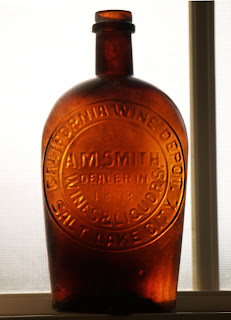 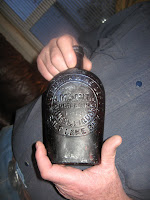 Finally!!! Some 40 years after the first broken pieces of the A.M Smith California Wine Depot flask were first discovered or at least identified, an intact example has surfaced. This bottle has been long sought after by collectors of Utah bottles and then by an even broader group of western whiskey flask collectors. It has been an elusive little bugger! After Blackie Owen found and identified the first broken one in Jan. 1968, there had only been 5 or 6 other confirmed finds, all broken.

There is a big story here, but I need to leave that to the new owner -- Ralph Van Brocklin. He is a much better writer than I and as soon as his feet touch ground again, I hope he will get that story off to the Federation's BOTTLES and EXTRAS.
Ralph sent me a couple of pictures... Look at those curved leg "R's"
Posted by soleagent at 9:43 AM