Has anyone really ever seen any broken pieces of this bottle? I mean hasn't it been long enough, should we officially call *Bulls--t* on this bottle?

I want it to exist, but since no other broken examples have ever shown up, I can't really believe in it any more.

Early diggers probably didn't pay as much attention to broken pieces and such as we do now, but even the great "beer label" whiskey town of Belleville failed to produce any fragments of the Old Signet. I have seen almost every defunct embossed whiskey bottle represented in this town, as the major west coast breweries were using anything that would hold liquid to ship beer into this town. Even the ultra rare Old Woodburn and Laurel Palace bottles have been found broken in this town, but no Old Signet. Every digger, screener, 'Harvey shard-raker' and their brother has taken a turn with Belleville, and no Signet pieces. Sorry gang, I don't think i 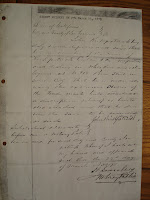 The Old Signet brand was trademarked in the state of California by John Kirkpatrick on March 23, 1875. In the application he indicates that he is the sole owner of the brand, and has been for "four years past" or since 1871. According to Eric Maguire's San Francisco Directory of Liquor Dealers, Kirkpatrick went it alone in 1871-1872. He joined forces with James McCue in 1873-74, changing addresses from 604 Front St. to 313 Pine Street during that time. In 1875, the firm is listed as Kirkpatrick, Cutter & Co. 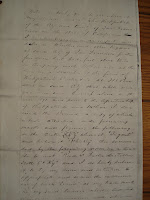 This is when he trademarked the brand. Who is this "CUTTER"? Then in 1876 the firm has changed to Kirkpatrick & Gentry, and listed for 1876 only.
I have a copy of the trademark application, the actual trade mark is for "Signet Whiskey - Reed & Fuller Distillers - Scott Co. K.Y." with the initials "R & F" inside a diamond shaped figure between the words Signet and Whiskey. 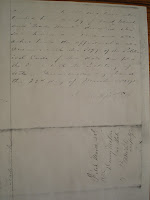 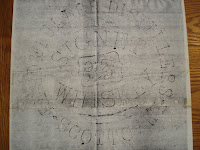 Posted by soleagent at 9:29 AM