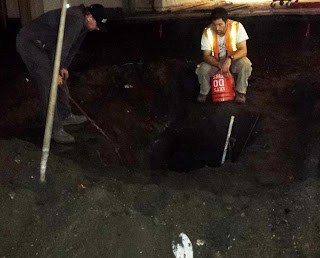 The night started like any other. Probing and probing, though about 2 feet of fill, on the entire property. After about an hour, we punched through the fill and hit an ash layer at the 6 foot level. That was the only evidence of cultural material anywhere on the property deeper than 3 feet, it had to be a privy. We took a quick break, then eagerly began plowing into the privy. The first 2 feet was brutal, nothing but pure brick, locked together like leggos. Eventually, an hour later, we broke through and hit clean hard clay at the 3 foot level. The next 3 feet was pretty smooth, just clay and the occasional fragment of pottery. The pieces looked old, at least 19th century, so we were confident we were not in a big deep TOC privy. We quickly fell into a fluffy ash layer and began pulling out 1880s pieces, first a crock beer, then a crude looking whiskey neck. Full of bubbles, with a giant drip, it had to be a slick. We were wrong ! The next piece out was the crudest looking Our Choice Brickwedel 5th I've ever seen. Hammer whittled, foaming with bubbles, in a nice yellow olive color. Of course, it was broken. More broken wines and crock beers appeared. Next up with a broken olive large letter Renz's; this guy was a drinker! I kept digging and more and more bottles cam out, but all slick generic types. Clunk, I felt a larger bottle. As I wiped away the layer, I could see the distinct outline of a embossed whiskey. I kept working it until I saw the word S.F, it was an embossed 5th, and not a Cutter. That is a rarity, almost anywhere you dig. As I wiped away the last of the layer, I saw an animal.........a bird ! It was a sole agent Phoenix Bourbon, and the old variant with the heavier embossing. I pulled it out and handed it up to my partner. I jumped out and my partner relieved me. 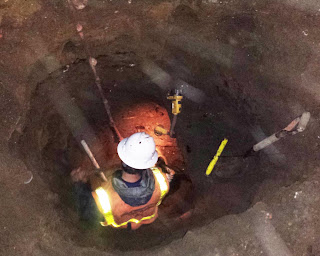 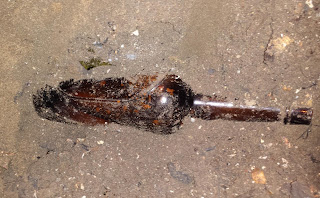 He continued down below the first layer and the pieces slowly got older and at the 8 foot level, we hit a solid 1870s layer. More bottles came out, a nice topaz Udolpho Wolfes and a few black glass ales. We then hit another cap, that went another 2 feet. Finally at the 10 foot level, we hit the bottom and final layer, solid 1860s. First out were a few wildly colored pontiled sodas, one pure green, and the other a teal blue. Next out were a few food bottles, then a shiny looking medicine. We wiped away the layer and found some embossing. Chretien Pfister, Tricomalicum. A rare 1860s flint glass hair bottle, circa 1865. Apparently Mr. Pfister ran a hair dressing saloon up in San Francisco from 1858 to 1872. Back to the privy, my partner finished off the bottom layer, and popped out a few more food bottles and few broken cathedral pickles in beautiful shades of teal and green. A few more aqua sodas and black glass ales came out before the final later petered out. All said, the privy bottomed out at 11 feet. 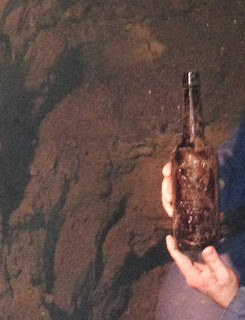 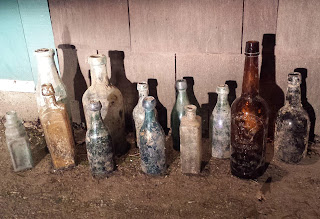 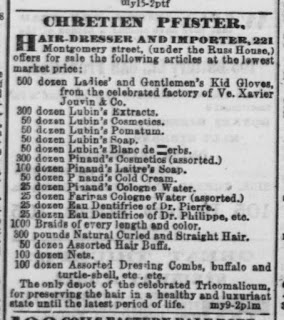