They Are Still Out There! 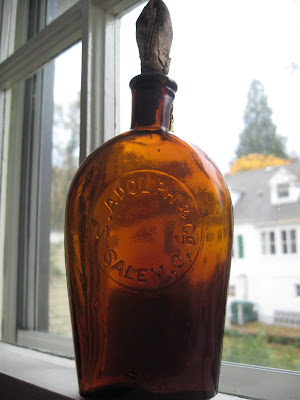 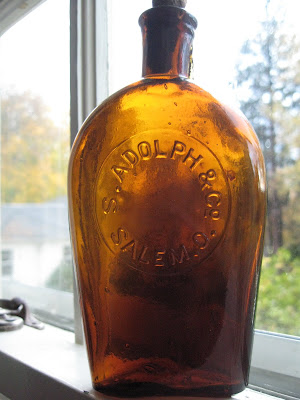 Recently I received a phone call from a plumbing contractor. He said that he had been doing some work under an 1860s house in "anytown, Oregon", and had found a crusty old flask with it's contents, and cork. It was embossed "S. Adolph, & Co. Salem, O." The flask was laying under about an inch of that grey light hanta virus laden dirt that we find when we crawl under old buildings. This house was being remodeled, but had modern plumbing, and electrical circa 1950s, so people had crawled around that house numerous times.
The contractor indicated that he had not yet told the actual homeowner about the find, but would later in the day...he asked what the bottle would be worth, and would I be interested? I was very excited, and told him to discuss it with the homeowner, and have either of them let me know if the bottle was available. If it was, I would make them an offer, and they could discuss it. He told me the homeowner's name, and hung up the phone. Needless to say, I was pretty excited. There were only two pints, and one half pint known, and I had two of them already in my collection. I waited for the phone to ring...for 5 months.
One day while I was in a TOC privy, my cell phone rang and it was the homeowner N.J. He stated that the bottle was available for me to purchase if I was interested, and he would be in Medford on the following Friday. He would meet me, and I could take a look at the flask, and we would work something out. He was going to provide a finders fee to the plumber from the proceeds.
Friday came, and just as promised, N.J. was at the meeting location carrying a little playmate cooler. In the cooler was a pint flask wrapped in rags,, and completely black inside and out. The contents had dried to a brick consistency, and the outside was coated with black crust. I could not tell if the bottle had a crack all the way around, or was mint, but I made an offer, and the deal was done. This was pretty risky.
I removed the doubled over leather "cork" and used paint thinner to remove the black tar stuff. I was relieved to find the flask in pristine mint condition!
While not the most elaborate or fancy embossed flask, this is the only tooled top pint known, and proves that there are still some great finds to be made out there. It is one of the West's rarest flasks, and one of Oregon's top bottles.The Hotaling glob top fifth from this Summer and this flask are great pieces of history found by non collectors!
Posted by Westernglassaddict at 4:38 PM