Ladies and gentlemen of the jury; have you reached a decision?


On the charge of falsely impersonating a Glass Works, we find the defendant, Holt Glass... GUILTY!

Based on weeks of both my and Andrew K's research, aided by libraries, historical societies and online archives, the irrefutable truth is that the existence of Holt Glass Works has been disproved.


Dr. Julian Toulouse first mentioned the existence of Holt Glass Works in his 1971 work, entitled Bottle makers and Their Marks. One website " Glass Factory Marks on Bottles" quotes Toulouse as saying " H. Holt Glass Works, West Berkeley, CA (1893-1906) is the source of various bottles with an "H", found primarily in the Western states. Holt-made bottles will have a number (with one, two, or three digits) accompanying the "H". In most cases, the number is reportedly found ABOVE the "H", although in some cases is may appear either below, or positioned to the right of the letter. (fonts occasionally differ slightly but are similar based on my observations)

And that is what we have accepted as fact for the past four decades. A few weeks ago, in an effort to date a different variant of the Gold Dust tool top that surfaced (it has a 684 "H" base mark), I decided to dig deeper into the Holt Glass story. Turns out that Andrew was doing what amounted to identical research; neither of us being aware of what the other was doing. This amounted to a double blind test when the cards finally hit the table.

And so, using different tools, we attempted to put the pieces of the puzzle back together. Problem was, the harder we researched, and the deeper we dug, the more Holt's mere existence seemed to slip from our grasp. To heck with tightening up the time frame and narrowing down the "* H" to "*** H" base mark. We couldn't even find written documentation of a Holt factory.


Later, we found a link to a Wm. Holt in conjunction with glass making in Berkeley. The reference was gleaned from a book written in 1952 entitled The Glass Industry; Volume 33‎ - Page 256 (Technology & Engineering - 1952).

In the meantime, weeks worth of corresponding finally started to pay off and I began to receive information from research librarians and historical societies in the East Bay. I also spent the better part of a day digitally screening all copies of the S.F. Call, and other Bay Area newspapers for news articles and or advertisements. I ran Holt Glass, Berkley glass factories, Berkley glass works, etc. etc. from 1890 - 1906. The search was absolutely void, nada, nuthin'~.

Finally documentation arrived in the form of an email from a senior research librarian in West Berkley. Unfortunately, instead of proving Holt Glass Works presence it seemed to reinforce the looming doubt that it never existed. It stated;


I found many references to industrial and manufacturing businesses in West Berkeley during the era you mention, including multiple references to a glassworks called O'Neill Glass Company located at the foot of University Avenue. However, there was no mention of a Holt Glass Works or Factory.


There were also references to two substantial fires in the area. The first, in 1893, is described in The History of West Berkeley as "BIG FIRE at Sixth and Delaware destroyed four buildings including a shoe store, a saloon, a butcher shop and adjoining dwellings." The second, in 1901 is described as "A disastrous fire destroyed the Niehaus Brothers & Company Planning Mill." Neither mentions a glassworks.


I found entries for a Wm. Holt in the Berkeley City Directories from that era. The first entry I was able to find is from the 1899 Directory and the last from 1904. They read as folows:


Finally this morning the final pieces of the puzzle arrived from the California Historical Society;


The California State Archives failed to produce any dates of incorporation for a Holt Glass Factory located anywhere within the confines of the State of California. 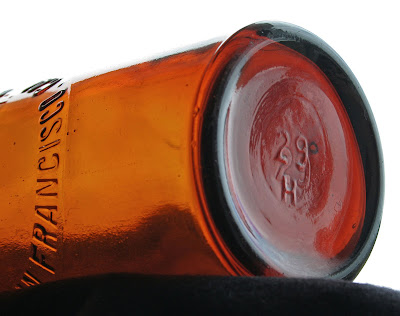 And to further muddy the water, I was compiling the Late Winter mailing list this AM, looking over bottles with a fine tooth comb, when I happened upon a disturbing discovery. In one hand I had an E.A. Fargo and in the other, a Taussig / 26 & 28 Main; both toolies and both with nearly identical 29 basemarks. The difference? One had the "H" beneath the 29, but the other a C... 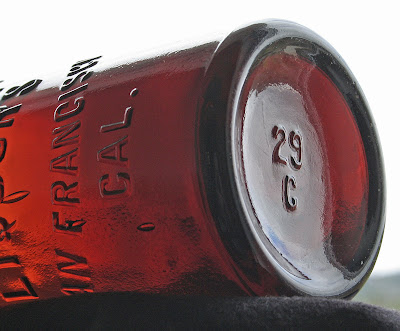 In conclusion, it appears that the base mark theory has been debunked. Yes, there are number over letter combinations but they can not be definitively linked to the non-existent Holt Glass works, or any other glass works for that matter. It also appears that Wm. Holt simply resided in Berkeley. He was indeed involved in glassmaking to a certain degree. However, his involvement was strictly limited to flat glasswares, as opposed to mold blown bottles, which were produced in San Francisco and not Berkeley. Had he either owned, or been involved in managing a glass factory that produced mold blown bottles, something would have shown up somewhere in the way of advertising or trade related news. The fact is, nothing exists.

Much as I hate to admit it, I think that we can agree with all certainty, that both the numbering system that we've attributed to the Holt Glass Works, as well as Holt Glass Works itself, have always been nothing but a myth.

Holt Glass; the jury sentences you to anonymity for life!

PS: One on hand Dr. Toulouse (and Bill Wilson for that matter), made more than their fair share of mistakes. And yet, they made do with what little they had to work with "way back" in 1971. Research into bottles and the companies that made them was all but non-existent. Archives were often located hundreds or even thousands of miles away from where these authors sat at their desks, trying to put the pieces of the puzzle back together. The internet was decades off and what research being done at that time was often accomplished via phone or US mail and often relied on librarians who may or may not have transcribed the available facts to the letter.

That being said, both authors did the best they could with what tools that they had available at the time, and yes mistakes were made. But without their efforts, odds are, we wouldn't be sitting here today, having a cup of coffee some forty years later, reassembling the pieces of the puzzle that they left for us.
Posted by Kentucky Gem at 1:45 PM