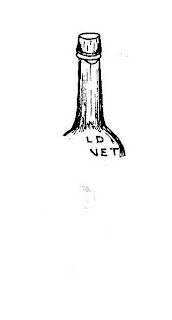 A number of years ago, in the summer of 1999, we attended the Reno Bottle Show. Deb (my wife) and I opted to “rough it” that year and towed our travel trailer, staying at the Nevada State park adjacent to the Bowers mansion west of the site of Washoe City, about half way in between Reno and Carson. Had a blast at the show and looked forward to camping and exploring over the next few days succeeding the show. During the course of conversation with old pal Loren Love of Dayton, he recounted how urban sprawl was affecting even the Nevada dessert with subdivisions beginning to spread out from Carson towards Dayton. He lamented how even the old site of Sutro was slated for development and how a subdivision had recently been competed nearby. The building had pushed nearly to the western edge of the old townsite and the balance of the site was slated for plat approval the next year.

We had a few archival photographs to work with and realized that this would be our last chance to dig there before the D8’s and belly dumps arrived, and the site was lost forever. As everyone knows, Sutro had been hit hard (real hard) since the late 50’s and the odds against scoring were stacked against us. Still we had the photos and although I’ve never been particularly lucky compared to some, have been rewarded over the years for my combination of optimism, gut instinct, brute force and perseverance. With the aid of the photos and the accompanying terrain, we located where we surmised the main drag had been. Keep in mind that a century of flash flooding, winter snows and blowing wind can make dramatic changes in the dessert floor. Still, it wasn’t long before we were into glass; and lots of it. We had quite obviously, lucked upon a large dumpsite covered by a foot or better of sandy dirt. It also became obvious that the Hostetters Bitters rep. had done a land office business back in the 1870’s. Every conceivable color was present. Lemon yellow to grass green – pucey amber to nearly black; you name it we dug it. Dozens and dozens of crude, early amazing Hostetters were dug; all broken. Also plentiful were glop top cylinders. Well at least broken ones. Unfortunately, fearing for our liberty, we were also looking over our shoulders and in the air for any evidence that we’d been spotted since we were technically breaking the law, even back then. Never mind about the ethical dilemma of losing history for good thanks to progress; the threat of arrest, fines and jail time were an ever present thought.

About two hours in, the fear of arrest really began to sink in and my wife insisted that it was time to get out of Dodge. That was about the same instant that I dug an intact top, neck and shoulder with embossing that seemed familiar. And yet, I couldn’t place it. That was also about the time that we saw a tell tale plume of dust approaching toward us along a jeep road. Enough was enough. We scurried toward our truck, hopped in and sped off in the opposite direction.

Safe back at our campsite, I stared intently at the broken bottle. I knew this one, I’d seen it somewhere before, or had I? I thumbed through Bob Barnett’s 4th edition but nothing jumped out at me. Out came Wilsons text, again nothing. In desperation, I pulled out my tattered copy of Thomas’s Whiskey Bottle of the Old West. I looked back at the piece. The top looked western to me, as did the color. The few letters of embossing also pointed to San Francisco, but what the heck was it. It was then that I thumbed to page 31 and looked at the bottle in the bottom right corner; number 98. Oh My God! I was holding apiece of the holy grail! There was no mistaking the location and combination of the few letters on the piece that I was holding.

Meanwhile, my wife was outside the trailer maintaining a diligent visual for approaching BLM nazi’s. She was convinced that they’d gotten our description and license plate number and that we were done for. Yep, just a matter of time… Her mood deepened and by the next morning it was obvious that this cloud of doom wasn’t going to lift. Shortly after breakfast, we broke camp and headed north. A couple of hours later, we crossed the California border and by nightfall were “safely” back into Oregon, our trip cut short....

The next day was like any other. Work, stowing away the camping gear, cleaning the inside of the trailer, storing away bottles from the show and putting the books back in the library. It was then that I reopened the Thomas book to page 31. There it was, bottom right. That warm feeling returned as I went in search for the Old Signet piece. My piece of the grail! Hmm. Not in the trailer where I put it, not in the bottle boxes. That warm feeling quickly left me, replaced by a much, much hotter feeling. I asked my wife if she recalled where it was and she meekly replied that she was so sure that we were going to get caught that she’d wrapped it up with the garbage in the trailer and deposited it in the trash can back at the campground. Not much was said around here for the next few days… So much for history, Eh?
Posted by Kentucky Gem at 4:39 PM