THE IMPOSTER IS WILLIAM HOELSCHER. LAUREL CROWN--- THAT *LYING SACK OF ****! YES, AND I INVENTED THE INTERNET!!!

I guess I shouldn't be too hard on old Billy Hoelscher, he... wait a minute, yes we should! When you try to scab off of the biggest whiskey name on the west coast, maybe the entire country....that takes some serious stones, or he was just plain stupid. Maybe in today's world, no big deal. I'm mean it isn't A.I.G. or Goldman-SUCKS, but for the time period it is akin to trying to pass off bogus Jack Daniels, maybe worse! Hotaling and Moorman were in no mood for any more 'bull-spit'. They had just ponied up 51,000 (1879) clams to get rid of Milton J. Hardy and E. Martin and their crappy Cincinnati "hell broth". They had fought that battle for 6 long years. They had to deal with John F. Cutter and his claim that they had stolen the business from his father. Chielovich tried to copy their barrel, other small time infringements, too many to name were dealt with continually. Now here comes Hoelscher, not only copying their trademarks, but claiming that he originated them! He even found someone at the California Trademark Office to sign off on his paperwork, no actual fact checking needed apparently.

This does sound like today's events, mortgage fraud, bureaucratic ineptitude, jeez, maybe Hoelscher was just ahead of his time.

Warren Friedrich, in his research, has found quite a number of battles between liquor dealers, wine and spirit distributors, brand originators, so on. It seems like they were all battling in the press and in their advertising as to which distributor was legit., who was selling counterfeit product, who was copying labels, trademarks, etc. Many of these battles actually were settled in court! Fines and or jail time were assessed. They were serious about this counterfeiting stuff, and Warren has mainly been focusing on the early 1860's. Move on to the late 1870's, it would be just a guess on how much more J.H. Cutter product Hotaling is selling, as compared to those early 60's dealers. Safe to say, if the early dealers were that pissed about being scammed, what Hoelscher was doing was, well let's just say he was in way over his head.

It seems like Bill Hoelscher was doing just fine during the 1870's. According to Thomas' Whiskey Bottles of the Old West, Hoelscher and Conrad Mausshardt had formed a partnership and ran their own successful wholesale and retail liquor store for a number of years. William Hoelscher had a brother, Author G. Hoelscher. Author entered the scene in late 1878, as a silent partner. Mausshardt exited about the same time. The new name of the company (the two Hoelscher brothers) was now Wm. Hoelscher & Co.

Not that I know this as fact, why let facts get in the way of a good story, but it seems that Bill Hoelscher's problems started with Author getting involved with the decision making. Early in 1879 the idea was hatched, barrels and crowns make for good trademarks. Hey, why not use the O.K. and A No.1 brand names as well. Can't you just see the two Hoelscher brothers sitting down and coming up with this plan... I mean I wonder how many shots they threw back before this sounded like a great idea!

On Feb. 21, 1879, William Hoelscher signed and had notarized, documents purporting to be the owner and originator of certain devices and designs. Labels for Laurel Crown O.K. Old Bourbon and Laurel Crown A No1. Old Bourbon had been printed by M. Schmidt Litho. S.F. and were attached to the application. Hoelscher was awarded the trademark, #479, on Feb. 25th, 1879. 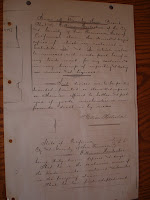 Trouble was that a certain well known brand, J.H.Cutter Old Bourbon, had been using the "English Crown" and the famous Cutter barrel, and the O.K. and A No1 brands for years. Several of these trademarks were registered in the U.S. Patent Office. C.P. Moorman, and his west coast agent A.P. Hotaling, had been in a spirited court fight for 6 years against Milton J. Hardy, and the San Francisco firm of E.Martin & Co. Hardy was the son in law of the original John Hastings Cutter. Both Moorman and Hardy had been granted the use of the J.H. C 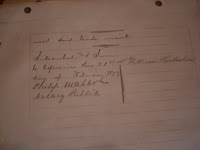 utter name and trademarks in an 1873 ruling.
Finally after years of battles, in the courts and in the press, C.P. Moorman was able to gain a decision in the U.S. Supreme Court, and for the sum of 51050.00 he was awarded sole use of the J.H. Cutter brand, including all trademarks. This was awarded in July of 1879.

I'm sure that A.P.Hotaling was well aware of the Wm. Hoelscher & Co., and the Laurel Crown whiskies. As soon as C.P. Moorman won the Supreme Court case, Hotaling filed suit against William Hoelscher to stop the fraudu 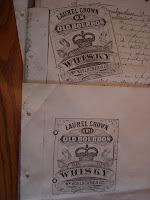 lent use of certain well known trademarks. The case was brought to a conclusion quickly and Laurel Crown disappeared as fast as it originated. There is some evidence that Hoelscher was trying to dispose of the embossed bottles. Several examples of this bottle have been pulled from the San Francisco Bay. Could Hoelscher have dumped his empty bottles to get them out of sight? Possibly, but bottle recyclers picked up a few of them and they were shipped into Belleville, NV. I have seen quite a few broken Laurel Crowns in "beer label town".

So from Feb. 1879, maybe Hoelscher started using the bottle a little before the application, until July 1879 or until Hotaling shut him down. 6 - 8 months is a pretty short time line! Now you know why they are so rare.
Did Bill Hoelscher really think he could pull this off? Maybe he thought the Moorman - Hardy court battle would go on indefinitely. Maybe he was delusional and really thought he originated the trademarks (Al Gore). It seems like he came to his senses. After the Laurel Crown fiasco, he prospered in the wholesale liquor industry for 30 more years!

About 10 known examples of this extremely rare fifth. Hoelscher was determined to copy the Cutter bottle completely. There are two different embossed Laurel Crown bottles. Most have the 'A No. 1' in a circle on t 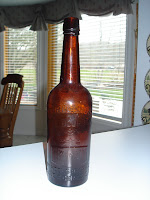 he reverse, and one that I know of has the 'O.K.' in a circle on the reverse. Maybe other O.K.'s exist, but Fred Kille has the only one I have seen.

Here is one of the S.F. bay "rollers". Not the skaters, but a bottle that rolled around in the bay until the embossing was just about gone.

Posted by soleagent at 9:35 PM