I am still pretty jazzed about the recent appearance of the first intact A.M. Smith - California Wine Depot - Salt Lake City flask. Thought I would give a little background on the fascinating Mr. Smith. Not only did he operate as a wholesale and retail liquor dealer in three different cities, Salt Lak 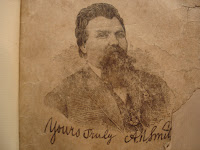 e 1872-75; Philadelphia 1875-1886; and finally, and most famously in Minneapolis from 1886-1915, Smith was a numismatic writer and coin collector of high merit. While in Philadelphia, Smith became interested in coins and the minting of coins at the facility in Philadelphia. Smith wrote quite a number of books and pamphlets on coin collecting and his Encyclopedia of Gold and Silver Coins of the World written in 1886 was the standard work on the subject for many years. Check out this web page of a display put together by Mr. Pete Smith, a relative of A.M. Smith. Pete won best of show with his display. www.coinbooks.org/club_nbs_exhibit_amsmith.html
You can see that A.M. Smith wrote two autobiographies, Up and Down in the World or Paddle Your Own Canoe; and The Luck of a Wandering Dane.
These are pretty fascinating to read, to really get a glimpse into the start up of his business in Salt Lake and the move to Philadelphia is very interesting. The only other western liquor dealer that I know of that has as much personal information available is the great A.P. Hotaling. 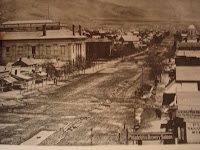 Here is a photo of Salt Lake in 1874 or so. Check out the box by the side of the road in front of Smith's Wine Depot. Appears to be full of bottles. 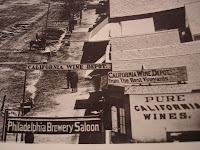 Embossed A.M. Smith bottles are known from Philadelphia, an amber strap-side flask that is also extremely rare. His bottles from the Minneapolis address are well known and there are upwards of 25 to 30 different examples of embossed flasks available to collectors.